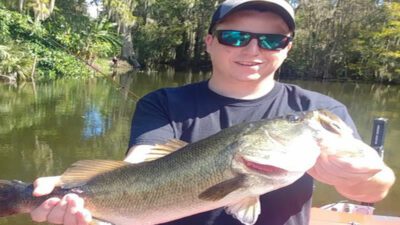 Knowledgeable local anglers and fishing guides produce excellent catches of bass on a regular basis. Many local clubs have conducted a weekly or monthly tournament on the Harris Chain for many years. However, analysis records over the last five years show that the Harris Chain of Lakes to be very productive, producing 5 fish tournament limits of over 20 pounds on a regular basis. Many times, Nine, ten, and 11-pound bass regularly anchor these catches. In 2012, our fishing guides have been more consistent year-round on this Harris Chain of lakes than ever before.

Changes made to the Harris Chain of lakes

In the early nineties, Florida Fish & Game implemented a five-bass 14" daily limit that went a long way to improving the overall success of the Harris Chain of lakes for Florida bass anglers in Leesburg Florida. Catch and release caught on with anglers and guides all over Florida since 2001, after a severe drought created an artificial drawdown that re-grew mile of eelgrass, pads and shoreline cover. During the drought, game officials and local residents also replanted acres of beneficial reeds in large areas of the Harris Chain of lakes. Water levels have now returned to normal and the Chain is producing good numbers of bass. Many 10 and 11 pound fish are caught each spring along with an occasional giant in the 12 to 13-pound range.

Why the Harris Chain of Lakes?

The Harris Chain of lakes are extremely fertile and contain mostly stained green color water. The primary cover is Kissimmee grass, eelgrass, lily pads, reeds, and bulrushes. There is some very clear water, but it is limited to the backs of residential canals and in the spring creeks that feed the lakes. If you are fond of fishing light tackle in crystal clear water, you will have quite a shock in these waters.

These are big fish lakes with strong healthy bass, requiring stout tackle and power techniques. Finesse tactics work well in these lakes and canals, as always you take your chances of breaking off a nice fish when using lite tackle. There is generally the same pattern on this chain of lakes as any other in Florida, two main distinct patterns to Harris Chain bass fishing is open water main lake fishing and canal fishing. The other two popular ways of fishing are deep holes and site fishing.

The seasons and the weather dictate which pattern is best for a particular time. Word of advice, if your not around them, go find them. They generally in groups on this chain of lakes.

A big part of the Harris Chain of Lakes is Lake Harris the bigger of the two main lakes of this chain of lakes at over 15,500 acres. Big Lake Harris average depth is much deeper than Lake Okeechobee to the south and has many deep holes and ledges. The lakes are surrounded by beautiful homes and cypress trees. There are three public launching ramps on Big Lake Harris; off of US Highway 27 to the west, Venetian Gardens in Leesburg and Hickory Point near the Howey bridge off State Road 19. There is a small but serviceable ramp located on the east side of Little Lake Harris in the City of Astatula. The lakes are almost totally ringed with Kissimmee grass and reeds except for the occasional boat dock or seawall.

The depth in the grass normally ranges from 2-5 feet. The bottom is mostly hard sand except for some shallow marshy areas where the bottom is soft mud. Excellent bass fishing can be found in the Ninth Street canals and in the Dead River areas. These two locations offer a good place to fish during bad weather. Unknown to most anglers is a deep ditch that runs along the south shore of Big Lake Harris in Yalaha.

This ditch which averages about 15-17 feet in depth, was created by a clay mining operation many years ago. The ditch has a hard bottom and many shell bars along its sides. Numerous large bass is caught each year by trolling and casting deep running crankbaits near this structure. Water skiers and jet skiers have mostly avoided these lakes as most of the larger lakes in Florida. In the last 10 years, the lakes have cleaning up considerably, which also has started to bring more boating activity. Still, it's a fraction of the traffic found on most Orlando lakes like Lake Toho of the Kissimmee Chain.

One of the more popular lakes in the Harris Chain of Lakes is Lake Eustis which covers 7,806 acres and is connected to Big Lake Harris through the mile-long Dead River and Lake Griffin through Haines Creek. Both Haines Creek and the Dead River have excellent fishing in season. Surrounding Lake Eustis are numerous residential canals which at certain times of the year can be very productive. It is also the home of the famous "Gator Hole", a deep sinkhole at the end of a natural canal leading off the main lake. This hole produces scores of bass and can produce the fish of a lifetime if you are there at the right time. For most of the year, the canals produce the most consistent action in Lake Eustis.

There are two public boat ramps on Lake Eustis. The popular Buzzard Beach ramp is located between Tavares and Leesburg on State Road 441. The Eustis city ramp is located on Lakeshore Drive just south of the City of Eustis.

Together, the East Harris Chain of lakes; Dora, Beauclair and Lake Carlton cover 4,475 acres. They are connected to Lake Eustis on the north through the Dora Canal and to Lake Apopka to the South through the Apopka Beauclair Canal. During the recent drought, Game Officials and local anglers planted a considerable amount of new reeds in these lakes. These reeds are now flooded and have begun to fill in the shoreline. Lake Dora is traditionally the first to turn on in the spring and does hold bigger fish at times than the rest of the Chain of lakes. Again, Kissimmee grass, reeds, and bulrushes are the predominate cover. The boat docks in this lake, especially along the north shore can be very productive during the middle of the day.

South of Lake Dora is Lake Beauclair and tiny Lake Carlton. Lake Carlton can be reached through a small inlet on the southern shore of Lake Beauclair. Both of these lakes are known for giant bass. Most of the big fish are caught by flipping, pitching and using wild shiners on the boat docks and reeds. Many local and professional anglers have placed brush piles in these lakes. The Apopka Beauclair Canal system is a sizable area of clear water that holds bass year-round. The entrance to these canals is located near the southwestern shore of Lake Beauclair. There is a lot of water to be fished and it is all excellent at times. The so-called "Clear Canal" is located here, which is a major sight fishing area in the bedding season.

Many tournaments have been won in this area for those willing to make the long run. There are three public boat ramps on the East Harris Chain of lakes; two on Lake Dora and one in the Town of Lake Jem. The Lake Jem ramp is on the Apopka Beauclair canal.

Lake Griffin is the last lake in the Harris Chain of lakes. Water flows into the Lake through Haines Creek and exits into the Ocklawaha River flowing north through the Ocala National Forest as it winds towards the St. Johns River and out to the Atlantic Ocean at Jacksonville. After that, until the late eighties, Lake Griffin was one of the best bass fisheries in the State. A host of problems contributed to the collapse of the fishery around 1990. A major contributor being the over-application of herbicides which killed all of the offshore covers in the Harris Chain of lakes.

However, bass fishing remained poor until consecutive droughts lowered lake levels and allowed new weed growth to take hold. In addition, restoration efforts in the form of shad removal and run-off controls are starting to have a healing effect on the lake. An additional benefit occurred in 2007 when some of the small lakes near the Orlando airport were filled in because birds were interfering with air traffic. Some of these lakes had never been fished and contained many large bass. Dr. Canfield, a professor at the University of Florida, was instrumental in convincing the authorities to relocate these bass to Lake Griffin. Two of these bass were reported to be in the 14-pound range.

In addition, an agreement was finally reached with waterfront homeowners to allow the State and Local Government to dredge the canals. After that, the dredging began in early 2007 and will continue until 2008. The water authorities also opened a navigable entrance into the Emeralda Marsh, which has produced a number of local and national tournament bags. At this time, good catches of bass are occurring as eelgrass, Kissimmee grass, and hydrilla return. The water quality has greatly improved and we expect the lake to be an excellent fishery as restoration efforts continue. To learn more about Harris Chain of Lakes restoration, click here to view the Harris Chain of Lakes Restoration Council's website.

In conclusion, Lake Apopka at this time, Lake Apopka continues to be under restoration. The State of Florida has spent over 100 million dollars to buy out most of the farms around Lake Apopka and is currently working on a 10-year plan to bring back the outstanding fishing that this lake was once known for. Bass fishing is mostly limited to the Gourd Neck Springs area. This spring pumps huge amounts of clear water into the lake and has produced many giant bass caught mostly by flipping the nearby grass.

harris chain
Friday, January 13, 2017
★★★★★
“ Our first day on the water was such a great day, my father and I decided to book another half day trip two days later while we were on vacation here. Our guide was Capt Steve. He was the most knowledgeable person about bass fishing that we could've had. He took us to all his great spots where we caught about 30 fish each day. I even caught an 7.4 LB bass and it was my personal best trophy bass. If you want to have a great day on the water I highly recommend Steve as your guide. You will not be disappointed. Great experience.”
- Justin S

harris chain
Wednesday, July 16, 2014
★★★★★
“ I’ve been bass fishing since I moved to Florida twenty years ago. I’ve caught plenty of bass but after absorbing the information and tools on your website, I’m catching way more fish!”
- Bob Hill
To Read ALL SITE Reviews Please Click Here!