Description of the Largemouth bass

Largemouth bass grows 4 to 8 inches (10 to 15 cm) during their first year, 8 to 14 inches (20 to 30 cm) in two years, 18 inches (40 cm) in three years. They are usually green with dark blotches that form a horizontal stripe along the middle of the fish on either side. The underside ranges in color from light green to almost white. They have a nearly divided dorsal fin with the anterior portion containing nine spines and the posterior portion containing 12 to 13 soft rays. Their upper jaw reaches far beyond the rear margin of the eye.

Life History of the Bass

Except for humans, adult largemouth bass is the top predators in the aquatic ecosystem. Fry feed primarily on zooplankton and insect larvae. At about two inches in length, they become active predators. Adults feed almost exclusively on other fish and large invertebrates such as crayfish. Larger fish prey upon smaller bass. 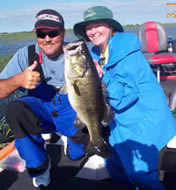 In Florida spawning begins in the spring when water temperatures reach about 62°F. This could occur as early as December or as late as May, depending on one where one is in the state. Males build the nests in one to eight feet of water. Largemouth bass prefers to nest in quieter, more vegetated water than another black bass, but will use any substrate besides soft mud, including submerged logs. As in Guadalupe bass, once the female has laid eggs in the nest (2,000 to 43,000) she is chased away by the male who then guards the precious eggs.

The young, called fry, hatch in five to ten days. Fry remain in a group or “school” near the nest and under the male’s watch for several days after hatching. Their lifespan is on average 16 years.

Immature largemouth bass may tend to congregate in schools, but adults are usually solitary. Sometimes several bass will gather in a very small area, but they do not interact. Largemouth bass hides among plants, roots or limbs to strike their prey.

Habitat
Largemouth bass seeks protective covers such as logs, rock ledges, vegetation, and man-made structures. They prefer clear quiet water but will survive quite well in a variety of habitats.

The largemouth bass was originally distributed throughout most of what is now the United States east of the Rockies, including many rivers and lakes in Texas, with limited populations in southeastern Canada and northeastern Mexico. Because of its importance as a game fish, the species has been introduced into many other areas worldwide, including nearly all of Mexico and south into Central and South America.

Northern Mexico has the same stand bass as texas and is caught and fights about the same. The northern largemouth is a little different than all the rest but similar in so many ways although its size many do to water temperatures is smaller. No matter where the species is caught or found its the most popular sport fish in the world.

Because of the strong interest in largemouth bass fishing, there are hundreds of bass angling clubs in Texas devoted to fishing and conservation. Bass fishing adds greatly to the Texas economy each year and largemouth bass are highly prized for their value as food. Because of the species’ popularity, it has been introduced into many waters in which it did not originally occur. As with nearly all aquatic species, pollution and drought are the biggest threats to the largemouth bass population.

More Information on the largemouth bass

The largemouth is marked by a series of dark, sometimes black, blotches forming a jagged horizontal stripe along each flank. The upper jaw (maxilla) of a largemouth bass extends beyond the rear margin of the orbit. The largemouth is the largest of the black basses, reaching a maximum recorded overall length of (38 in), and a maximum recorded weight of 22¼ lb. The fish can live as long as 23 years.
The juvenile largemouth bass consumes mostly small bait-fish, scuds, and insects. Adults consume smaller fish, crawdads, frogs, snakes, salamanders, and even small water birds, mammals, and baby alligators. In larger lakes and reservoirs, adult bass occupies deeper water than younger fish and shift to a diet consisting almost entirely of smaller fish like shad, trout, ciscoes, shiners, and sunfish. Prey items can be as large as 25 to 35% of the bass’s body length. Studies of prey utilization by large-mouths show that in weedy waters, bass grows more slowly due to difficulty in acquiring prey. Less weed cover allows the bass to more easily find and catch prey, but this consists of more open-water baitfish.

Paradoxically, with little or no cover, bass can decimate the prey population and starve or get stunted. Fisheries managers need to take all these factors into consideration when designing regulations for specific bodies of water. Under overhead covers such as overhanging banks, brush, or submerged structures such as weed beds, points, humps, ridges, and drop-offs, the largemouth bass will use its senses of hearing, sight, vibration, and smell to attack and seize its prey. It can sometimes hold up to 5 sunfish in its mouth. Adult largemouth generally is apex predators within their habitat, but they are preyed upon by many animals while young. PENDING LARGEMOUTH BASS RECORD 25.1

The largemouth is keenly sought after by anglers and is noted for the excitement of their fight. The bass we caught will often become airborne in their effort to throw the hook, but many say that their cousin species, the smallmouth bass, can beat them pound for pound. Anglers love bass, large fish or small fish, the fish fights really well. Most often fish for largemouth bass with lures such as plastic worms (and other plastic baits), jigs, crankbaits and spinnerbaits. A recent trend is the use of swimbaits to target trophy bass that is used to hunting larger bass in Florida.

Live bait, such as nightcrawlers, minnows, frogs or crawfish, and earthworms, can also be productive. In fact, large golden shiners are one of the best things to use to catch trophy bass, especially when they are sluggish in the heat of summertime or in the cold of winter.

There is a strong cultural pressure among largemouth bass anglers which encourages the fish’s live release, especially the larger specimens. Largemouth bass, if handled with care, respond well to catch and release; many studies have shown specimens that have survived being hooked and released multiple times.

The International Game Fish Association (IGFA) officially recognizes the heaviest largemouth bass on record as having been caught by George Perry in Telfair County, Georgia, on June 2, 1932.

The largemouth bass is the state fish of (freshwater fish), Florida