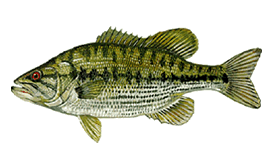 The spotted bass (Micropterus punctulatus) is a North American freshwater fish species in the sunfish family. The spotted bass is known for the rows of dark spots below the lateral line, which gives it its common name.

Despite being smaller and less numerous than largemouth bass, the spotted bass is an excellent fighter.

Several spotted bass and smallmouth bass hybrids have been collected recently in reservoirs suggesting there is occasionally competition for spawning habitat between the two species.

Spotted bass are similar in appearance to the largemouth bass. It has a green to olive-green hue, white, mottled belly, and a broad stripe of broken blotches, usually diamond-shaped, along the body’s midline. However, unlike the largemouth, the spotted bass has scales on the base portion of the second dorsal fin; its first and second dorsal fin are clearly connected, and its upper jaw does not extend past the eye. In general, a spotted bass will resemble a largemouth bass in appearance but have a smaller mouth.

The cheek scales are usually much smaller on a spotted bass than those on the rest of its body.

While widely distributed outside Florida, the spotted bass is restricted to streams of the panhandle from the Perdido River to the Apalachicola River. Abundance is limited in this area, but the fish primarily occurs in and west of the Choctawhatchee River. Both spotted and largemouth bass are native to the central and eastern United States but have become widely introduced throughout the nation.

Spotted bass prefers small to medium streams and rivers with clear, slow-moving water, gravel or rock bottoms, or clear lakes. Spotted bass may occupy reservoirs but are seldom found in natural lakes. They do not enter brackish water and typically inhabit areas that separate them from closely related species like its largemouth bass and smallmouth bass cousins.

Spotted bass are usually found in areas with more current than largemouth bass and typically inhabit areas too warm, sluggish, and turbid for smallmouth bass.

Similar to other black basses, spotted bass tend to stay near cover in the forms of stumps, logs, and other submerged structures.

Spotted basses tend to grow slower than largemouth bass and do not attain as large a size as other species. The young grow to 1-1/2 to 4 inches the first summer. Maturity is reached at about seven inches.

Spotted bass spawn very much like the largemouth. Spawning occurs in the spring when water temperatures reach 60 to 65 degrees. Sexually mature mates build saucer-shaped nests on soft gravel, or rock bottom, generally near brush, logs, or other heavy covers. The eggs hatch in four or five days, yielding up to 3,000 fry per nest.

Although a large proportion reach maturity within a year, spotted bass found in spawning areas are usually three to four years old. Rock and gravel are typically chosen as suitable spawning areas at water temperatures of 57-74°F. However, nest depths may vary widely. Females may lay between 1,150 and 47,000 eggs. Males guard the eggs during incubation and for up to four weeks after they have hatched.

The principle food items for spotted bass are crayfish, small fish, and aquatic insects. The species is less piscivorous than other black basses and seems to be more selective in its feeding habits.

As young fish grow, their diet shifts from zooplankton to insects, and finally to fish and crayfish.

Rocky banks are vital to finding spotted bass in most locations. Spotted bass often congregates along bluff ends, cedars, and timber on main lake points during the winter months. A practical method is to drag a heavy jig and craw trailer about 15 to 30 feet deep to land bottom-hugging fish. Another option is to jerk a suspending jerk bait in shad hues to catch suspended fish.

Topwater poppers, walking plugs, and prop baits are most effective for catching spotted bass during the post-spawn or early summer. In late summer, it is best to fish deeper water by drop-shotting finesse worms along with the long tapering points or bluff ends.

They are known for having white, flaky meat with good flavor and are generally considered better eating than largemouth.