Water levels can often change on the Choctawhatchee River. So at times, angler’s access may be limited to areas. Spring largemouth bass fishing is generally the best when water temperatures increase, and bass prepares to spawn. Recommended baits are live shad if available, or, of course wild shiners. When fishing artificial lures, loud crankbaits seem to be the best bait to cover a lot of water. 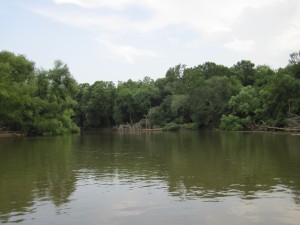 The Choctawhatchee River has an excellent population of large bream. Bream fishermen should search the shorelines by spot fishing, as you would for bass to locate bream when accessible. Choctawhatchee River spawning activity for bream peaks during the full moon in April and May. Using wigglers, earthworms, and crickets with a split shot sinker on the lite line that seem to work best. Bream will aggregate around spawning areas, as in most lakes.

So, if you begin to catch fish, fish the area for spots within the same places. Crappie fishing will be at its best when they move in to spawn. Most crappies are caught below the Highway 20 bridge west of Ebro. Try fishing the backwater lake areas around woody debris with small crappie minnow jigs.

During the spring on the Choctawhatchee River, striped bass and sunshine bass anglers should fish the river in the early morning or evening, generally better on an outgoing tide. Look for stripers feeding; they swim in schools around lots of shad. Cast into the activity with a lure mimicking a shad, and they will be sure to strike your lure. Large striped bass move upstream during their spawn, which runs as water temperatures approach 65-68 degrees.

When fishing up the Choctawhatchee River, look for areas where the current is the swiftest, and check your depth finder for deep holes adjacent to sandbars and points. The mouth of East River, and the junction of Pine Log Creek and East River, are the right places to start fishing. Live shad and shiners can be free-lined off the back of the boat. Catch data indicate that many stripers, 15-30 pounds, and hybrid striped bass, 4-8 pounds live in the river.

The Choctawhatchee River is Floridas’ third most extensive river system in terms of water volume discharged. Originating in the southern portion of Alabama, the river flows approximately 96 miles from the Alabama state line into Choctawhatchee Bay.

Choctawhatchee River, in general, anglers will enjoy the most incredible success fishing when water levels are low, and the river is within its banks. Nice stringers of bluegill and redear (shellcracker) are caught off the spawning beds in the spring and along riverbanks lined with deadfalls and snags the rest of the year. Crickets and wigglers are good baits for pan-fishing.

Many local anglers swear by the catalpa worm, frozen in clear corn syrup, and used throughout the year. Try fishing the mid to upper reaches of the river system for your bigger bream. The largemouth bass is commonly caught on crankbaits, spinnerbaits, and artificial worms throughout the river system. Big bass can usually be found around treetops and snags in the mid and upper reaches of the river and along the saw grass flats down by the mouth.

Sunshine bass (hybrid striped bass) and striped bass fishing are excellent in the spring and fall throughout the river’s lower end. These fish are stocked annually by the Florida Fish and Wildlife Conservation Commission.

Preferred baits include finger mullet, live shad, and shad-like lures on the Choctawhatchee River. The best fishing is on the outgoing tide at dusk or dawn. Areas to target include sandbars and points in the river. It should be noted that harvest and size regulations differ for the sunshine and the striped bass (see current regulations handbook).

Popular boating access points along the Choctawhatchee River include Hwy. 90 (Caryville), Hwy. 20 (Ebro) and along River Road off Hwy. 20 (east of Bruce), there are several boat landings and a bait shop. For access to the lower river. Take Hwy 331 south of Freeport and go left on S.R. 394 about a mile. Then look for the signs.

Holmes Creek, a major spring-fed tributary of the Choctawhatchee, offers some excellent fishing. Several bream species can be found in abundance, including longear sunfish, spotted sunfish (stump knockers), redbreast sunfish, and warmouth. Big Shell-crackers can be caught along the channel side of water lily beds. The spotted bass, a close relative of the largemouth bass, is also native and exciting to catch fish.

There are several-boating access points along Hwy. 279 (Vernon) and Hwy. 79.