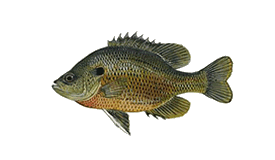 Spotted sunfish are olive-green to brown in color, with black or reddish spots on the base of each scale forming rows of dots on its sides.

The preferred habitat is slow-moving, heavily vegetated streams and rivers with limestone, sand, or gravel substrates.

A nest-builder that tends to be more solitary than other members of the sunfish family. Males are very aggressive and antagonistic toward other fish in their nesting area. They generally feed on the bottom, but will rise to the surface to feed. The bulk of their diet consists of a variety of plants and animals that are usually associated with aquatic vegetation, brush, or rubble.

Because of its small size spotted sunfish have limited food value, but it is a feisty panfish. The same methods of fishing discussed for the redbreast sunfish apply for the spotted sunfish.

The spotted sunfish (Lepomis punctatus) is a member of the freshwater sunfish family and order perciformes>. The redbreast sunfish, bluegill and red-spotted sunfish are closely related species. Lepomis punctatus is olive-green to brown in color with black to reddish spots at the base of each scale that form rows of dots on the side. The scientific name punctatus refers to this spotted pattern. It was first described in 1831 by Valenciennes.

The spotted sunfish is a warmwater native of the Southeastern United States that inhabits areas of slow moving water. It is a benthic insectivore. Spotted sunfish do not commonly exceed 10 cm and a weight of 3 oz. It has some value as a pan fish and is occasionally caught by bream anglers. Spotted sunfish exhibit similar breeding behavior to other sunfishes. A single male guards a nest with multiple females. As of November 2012, it has not been evaluated by the IUCN and shows little danger of decline or high sensitivity to habitat changes. It has been suggested that it could be used as an indicator species, making it valuable to stream management. The spotted sunfish is a habitat generalist, but prefers complex habitats. It has not been established as an invasive species in other parts of the world.