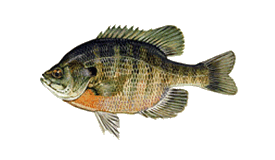 Bluegills are small sunfish that inhabit most freshwater areas. Florida bluegill have an attitude for their size and fight better than any other freshwater species of panfish. Bluegill are fun to catch and are second to none in the frying pan. Catching a mess of big bluegill is common throughout the late spring, early summer, and early fall in Florida.

The bluegill fish species is native to North America and live in rivers, streams, lakes, and ponds most. They are most commonly found to the east of the Rockies.

Bluegill can grow up to about 12 inches in length and about 4 1/2 pounds. Their color typically varies depending on their habitat, but they generally have very distinctive coloring. 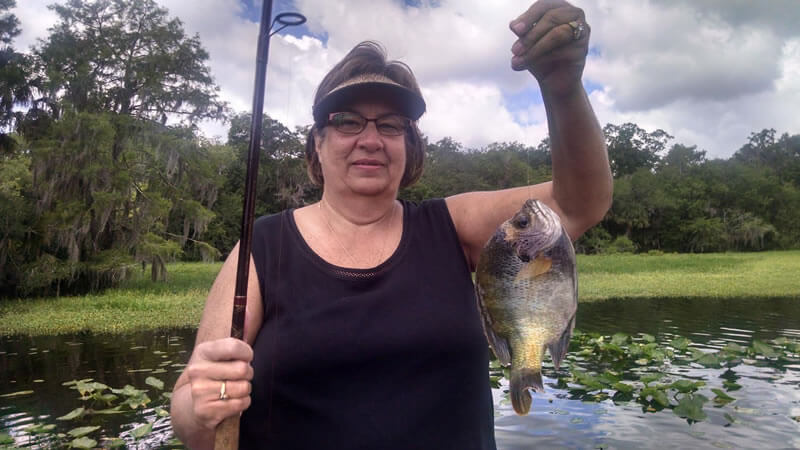 Bluegills have small mouths and oval-shaped, flattened bodies. Body coloration is highly variable with size, sex, spawning, watercolor, bottom type, and amount of coverage. In general, they are somewhat lavender and bronze with about six dark bars on their sides.

Males tend to have a copper-colored bar over the top of the head behind the eyes. Most of the year, the breast is silver to slightly blue, with some yellow or orange during the spawning season.

Females are generally lighter colored than males. Typically, the females have yellow on the throat while males have bright orange. Two distinctive characteristics are the prominent black spot on the rear edge of the gill cover and a black spot at the base of the posterior portion of the dorsal fin.

The bluegill is native to the east half of the United States and a small part of northeastern Mexico. So they are found naturally throughout Florida and across the United States because of widespread stocking. They have also been introduced to Europe and South Africa.

Bluegills prefer the calm, weedy waters where they can hide and feed. So they inhabit lakes and ponds, slow-flowing rivers and streams with sand, mud, or gravel bottoms, near aquatic vegetation. Prime habitats for bluegill include deep points, weed beds, or in a creek water column near sunken islands.

Growth is rapid in Florida, and spawning may occur within the first year. A one-year-old fish may be about four inches long. Bluegills can live up to 11 years, but most are less than seven years old. The rate of growth varies considerably in different bodies of water. However, six-inch bluegill in Florida is typically two to four years old.

Bluegills are well known for “bedding” in large groups, with their circular beds touching one another. Bedding occurs in water two to six feet deep over sand, shell, or gravel and often among plant roots when the bottom is soft. Spawning occurs from April through October, with peaks in May and June, when the water temperature rises to about 78-80 degrees. A female may lay 2,000 to 63,000 eggs, which hatch 30 to 35 hours after fertilization.

During the spawn, the large male bluegill “bull” or “copper head,” as they are called locally, because of the copper band that runs across their dark head are highly vulnerable to being caught easily. Therefore, bluegill during the spawn are at full coloration – dark lateral bars down their sides and a deep red chest.

After establishing their nesting area, the male bluegill guard nests, which are usually the same spawning sites year after year, will become very aggressive. They will strike at anything that intrudes into their nesting territory.

Although we talked about spawning months, we also mentioned that weather had something to do with it. Bluegill spawning will occur when the lake water is between 70 – 75. That could be as early as March and last as late as September. The male bluegill begins building a dish-shaped nest around a sandy depression that is 2 – 4 inches deep and from 8 – 24 inches wide. Bluegills gather in large colonies during the spawn.

In most cases, there are dozens of nests side by side in an area of 50 – 100 square feet. Bluegill spawning activities also cycle around the full moon periods. Therefore, the five-day period is a great time to catch a fish limit before and after the full moon.

Crustaceans, insects, and insect larvae are the dominant foods of bluegills, with fish eggs, vegetation, small fish, snails, and mollusks being of secondary importance. However, they may dominate their diet during certain times of the year. Overall, bluegill feed primarily on insects, both terrestrial and aquatic. They most actively feed at dawn and dusk when they retreat into the shallows. Bluegill feed primarily by sight.

Because of its willingness to take a variety of natural baits (e.g., crickets, grass shrimp, worms) and artificial lures (e.g., small spinners or popping bugs) during the entire year, its gameness when hooked, and its excellent food qualities, the bluegill is one of the more important sport fish in Florida and the eastern United States.

As a sport fish, specific bag and size limit regulations apply, and you can register a qualifying catch as part of the Florida Fish and Wildlife Conservation Commission’s “Big Catch” program.

Most anglers used to only think of bluegill as “bottom of the food chain” fish, and they are prey to larger species, but anglers who give them a chance realize that bluegill put up a hardy fight for their size.

Look for the bluegill bite to start picking up in April. Lake Okeechobee has numerous canals in the Everglades, Kissimmee River, and the complete Central Florida area, including Orlando. Beetle spins and crickets are the preferred baits for bluegill fishing.

Bluegill fishing is growing in popularity, and light tackle anglers have discovered that bluegill fishing provides the best freshwater action, ounce for ounce. Bluegill can be caught with various fishing methods, including fly fishing, drift fishing, trolling, and still fishing.

Overall, when bluegill fishing with bait, it’s best to fish shallow with a light, small bobber in the spring and near deep structure in the hot summer.

Where To Catch Bluegill

Bluegill fishing is excellent in shallow water during the spawning season when water temperatures are in the mid to high 60s. This is an ideal time for anglers of all skill levels to catch bluegill since they will be abundant and active.

During the summer, bluegill will be in deeper water in bigger lakes but remain in shallow water in ponds because of oxygen depletion in deep depths. However, the depths in larger bodies of water remain high in oxygen which is why bluegill can retreat to these deep levels with cooler temperatures and still breathe.

Some of the best bluegill fishing is done in small ponds, which is where some of the biggest bluegill were recorded. Bluegill inhabits almost all waters throughout the United States, but the largest fish tend to come from the farm ponds that receive much less fishing pressure. However, big lakes still have their fair share of big bluegills; they are often found in the deeper water for most of the year.

The key to catching a bigger bluegill, especially during the non-spawning time, is to use the heaviest split shot you have to make the bait fall deeper faster past the smaller sunfish to the bigger bluegill that may be hanging near the bottom.

The best fishing spots to do this are near vegetation or structure, such as near a tree stump. During the spawning season, the larger bluegill are often the first to move toward the shallows.

Anglers can cast their fly rod, cane pole, or spin rod along the edges of a spawning colony to fish the outside of the bed for a possible reaction strike without disturbing the interior of the nest. Anglers fishing the spawn should quickly release the large males, identified by a longer ear tab and bright red and blue breeding colors.

Excellent; the flesh is white, flaky, firm, and sweet. They are generally rolled in cornmeal or dipped in pancake batter before frying. Many rank the bluegill as the most delicious of all freshwater fish.

Bluegill and redear fishing will be at their best during the spring. Redear should be well into their spawning season by April. Much depends upon the weather at that time. Start looking for spawning areas within five days before and after the new and full moons. Areas to check this spring will be the shallow, rocky, and sandy areas throughout most Florida lakes. Most redear are taken on live worms. Bluegills usually start their spawning season a little later than redear. 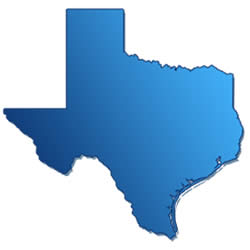 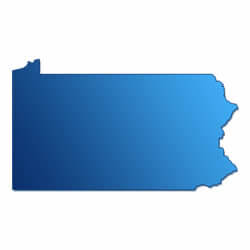 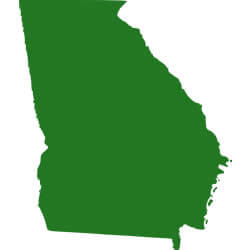 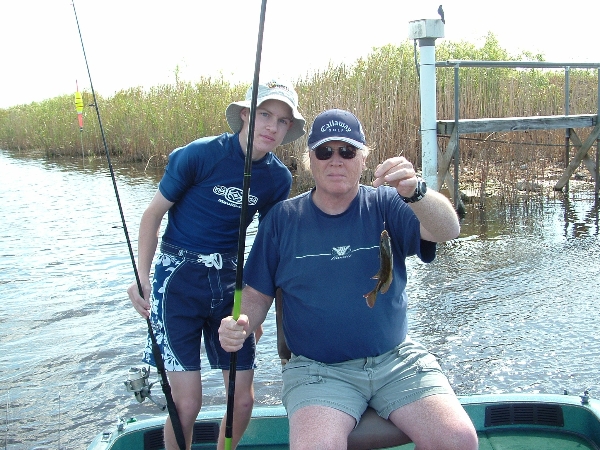 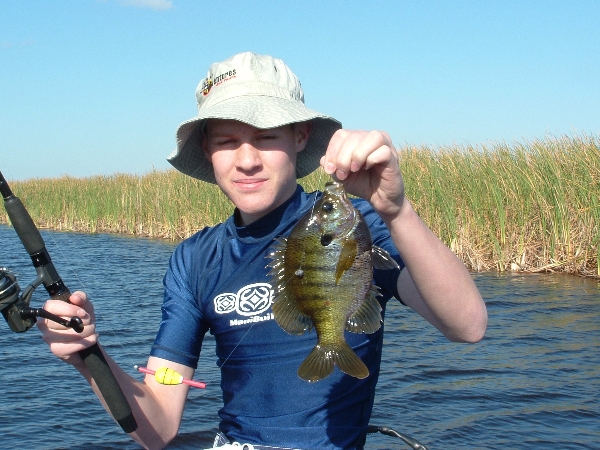 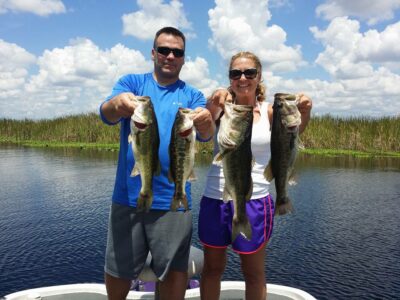