Allen and Billy Dyson are no strangers to Florida bass fishing, especially on Orange and Lochloosa lakes. The Hawthorne brothers have been casting for bigmouths in their home lakes since the 1960s when they were youngsters.

Since those days, the Dysons have caught lots of big fish and have a long list of amazing angling stories to tell. The most recent, however, will go straight to the top of the list.

Casting an old favorite bass plug on Orange Lake on Saturday morning, Allen had a huge swirl. As he called to Billy to cast to the spot, the fish struck again, this time, nailing the silver Devil’s Horse topwater lure.

“I thought it might be a big mudfish or even a gator,” Allen recounted. “But I knew it was big.”

He battled the big fish until it ran into a bed of hydrilla. When he worked the behemoth out of the grass, Billy was ready with the landing net. As Billy swung the full and writhing net aboard, the brothers were momentarily stunned. “We both said, ‘My God, what a fish.’”

Allen phoned his wife, Ginny, and son, Jeffrey, and they drove to the boat ramp at Heagy-Burry Park with camera and two hand-held digital scales.

On the scale made by Berkley, the monster weighed 13 pounds, 7 ounces. The Rapala digital showed 13-08.

After a thorough photographic chronicling, the Dysons took the brute back to the spot where she had struck, and released her in excellent condition.

Allen Dyson’s biggest bass up until last weekend had been 10-03, and now it will be nearly impossible to ever better his top fish. He doesn’t seem too upset about that.

At 13½ pounds, the bass ranks as one of the largest pulled from an Alachua County Lake in decades and should easily rank among the largest fish taken in all of Florida for 2009. 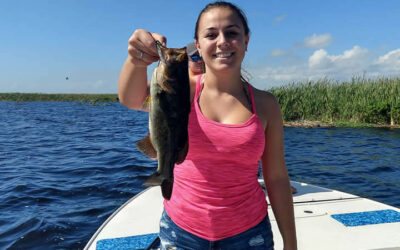 The Guide To Fishing For Fall BassFall bass fishing can be an exciting adventure while you target the hungry bass that...