Throughout this description of Lake George, you may see us lose sight of the fishing. While the fishing is just short of fabulous most of the time, the lake has so many other features as well. So as you are reading on, keep the fishing faith, and enjoy the read. 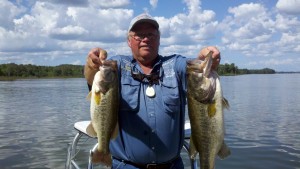 Lake George is the second-largest freshwater lake in Florida, only world-famous Lake Okeechobee is bigger in the Sunshine State. Clearly the largest with the St. Johns River system. Lake George covers some 46,000 acres or 11 miles long by 6 miles wide, George lies about halfway between the headwaters of the St. Johns River and the river's closure with the mighty Atlantic Ocean at Jacksonville.

The St. Johns River flows out of the lake at the north end at Rocky Point. To the east of this is Salt Cove, taking the flow from Salt Creek. Just south of Salt Cove is Lisk Point, named for a Dr. Lisk who built a house near the point. Steamboats coming down from Jacksonville made a counterclockwise loop around the lake with their first stop at Lisk Point.

So What about George?

Lake George has significant salt content. In fact, the saline level is high enough that many saltwater fish and plant species thrive in its waters. There is a large blue crab fishery that forms a significant part of the local economy. The St. Johns River waters, entering the lake at the South end, contain a good amount of salt from the run-off waters and springs, which enter between Lake Harney and Lake George. In addition, to the three feeder creeks, we mentioned above on the west side of Lake George. Salt Springs Creek, as the name would imply, is particularly salty. The waters gradually dilute as the river flows to the North, particularly when the clean, fresh waters of the Oklawaha River enter.

As we mentioned at the beginning Lake George is the second largest lake in Florida, after Lake Okeechobee. Why George was the third largest lake behind Lake Apopka, but the conversion of the littoral zone on the northern side of Lake Apopka to farm fields in the previous century reduced its surface area.

The lake also hosts a variety of wildlife ranging from migratory waterbirds and alligators to a number of normally marine animals. Local springs in Lake George (and throughout the St Johns River) impart enough salt to the system to make the habitat suitable to resident and migratory marine species like Atlantic stingray, various species of mullet, striped bass and blue crabs. There is a large enough blue crab population to support a local fishery, making it one of the only freshwater blue crab fisheries in the world.

When your fishing Lake George, note a cluster of pilings out in the lake. There are actually three of them and they are laid out in a circular pattern and serve as 'targets' for the bombing range. The center cluster is the largest and is significant because it has a ship sunk in the middle of the piling circle. Local anglers, who know the ship is there, find it a fine place to take crappie year-round.

When to be there?

In the months of May through July, the lake's striped bass population often provided great surface action in the bombing range area, particularly near the pilings. Watch for them and you can get the kinks out of your line in a hurry.

There are many fish camps and facilities around Lake George, particularly along the Northern side of the lake. Others at the South end, at Volusia Bar, and, of course, the Pine Island facility is on the Eastside. Additionally, the town of Crescent City is only 15 minutes East of George and has ample facilities for overnight stays.

Lake George
Monday, December 18, 2017
★★★★★
“ Amazing how shallow the lake is around the edges. Spawning season is nuts and lots of fun.”
- Steve Jackson
To Read ALL SITE Reviews Please Click Here!