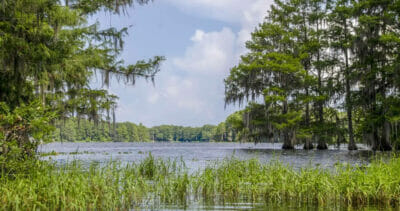 Since Tsala Apopka is the largest freshwater resource in Citrus County, efforts have improved recreational opportunities; meanwhile, equality is trying to provide land for residential development.

Extreme vertical water level fluctuation of 9 to 10 feet occurred in the lake before installing water control structures during the 1960s. The benefits of water level stabilization were reasonable predictability of water levels: increased fish production, and improved angling success.

Constructing canals, impounding the Withlacoochee River, and installing water control structures were considered necessary to accomplish some of these goals.

The first of these anticipated benefits realized improvements to the fishery have not occurred since they are not consistent with water level stabilization.

Except for Floral City Pool, which may still experience drawdown conditions during a drought, the system’s remainder cannot reach either high or low pool stages that natural conditions create.

Reproduction of largemouth bass in Tsala Apopka has not been a problem, although survival and growth into trophy size bass have been poor based on available data. Low natural productivity of the lake, stabilized water levels, and harvest by anglers may be reasons for poor bass recruitment in the past.

Fish population surveys indicated that the poundage of all fish produced per acre varied from pool to pool. Floral City yielded the lowest standing crop of combined fish species, then Hernando Pool, and followed with Inverness Pool that had the highest surveys.

Shiners or a type of live-bait are always right in this system. Use bait on the bottom for bluegill and redear sunfish. Water moving through any canal (whether by wind or current) is a likely spot for largemouth bass to congregate.

Continue to target submerged willow tree bases for these sanctuaries are known holdouts for largemouths. Texas-rigged rubber worms with no weight will allow anglers to flip baits within the security of these shaded environs.

Black crappie fishing picks up between December and March, and many successful anglers dip hooked minnows close to lily pads.

Casting white plastic grubs at the edge of maiden cane grass seem to work also. If water clarity is good, use a fly rod smaller diameter tippet to hide your line from discerning fish eyes.

However, until water levels rise, these canals can be very shallow and difficult to navigate.