Around Lakeland, bass up to 25 inches this week at Tenoroc, about 8-9 pounds, in lakes 4, Fish Hook and Tern on Junebug worms and spinnerbaits, reports Brian Fleming. Several limits of bluegill and shellcracker in lakes 2, C, and Hydrilla at Tenoroc on crickets and red worms. Anglers wading along cattails at Lake Parker catching 10-15 hand-sized bluegill, reports Stacy Roberts at Phillips Bait and Tackle at Saddle Creek Park. Bluegill bite slowed down at Saddle Creek. Speckled catfish biting after rains at Saddle Creek. And lakes 4, B, and Legs produce catfish at Tenoroc.

Limits of bluegill and shellcracker were commonplace over the weekend. Crickets and red worms were hot sellers. “I’m about out of crickets. They’re catching limits of bluegill just about everywhere,” said Ron Schelfo at Ron’s Tackle Box. “Pick your favorite lake.”

TRENTON BENNETT of Fort Meade, 4, reeled in this 12-pound, 4-ounce bass fishing with his grandfather, Joe Bennett, on Lake Kissimmee on July 12. Joe, from Camp Lester, hooked up with a topwater plug and handed the rod to Trenton. “Joe said he had to hold the back of his life jacket to keep him from going out of the boat,” said Joanne Cosce at Camp Lester. PRO BASS FISHERMEN and top local anglers are switching to fluorocarbon lines for casting soft plastics – worms, Flukes, and Senkos. Berkley Trilene 100% Fluorocarbon is a popular choice in 10-, 12-, 15- and 20-pound strengths, said Brent Howlett at Stone’s Outhouse. Fluorocarbon sinks, unlike monofilament.

In Winter Haven, bluegill creates some excitement on small city lakes and the south chain, with lots of limits on crickets. Lily pads in the south end of Lake Eloise are one hot spot. Bass action tapered off with high heat and break in thundershowers.

Lake Hamilton, bluegill, and shellcracker “absolutely great” over the weekend with red worms and crickets, reports Gary Parramore at Chain O’ Lakes Bait and Tackle in Dundee. But only small boats can launch at public ramps. Bass up to 4-6 pounds perked up on medium-large wild shiners (6-7 inches long) on area lakes.

As well, as Lake Marion near Haines City, limits of bedding shellcracker and bluegill drew a crowd over the weekend with full moon on Friday, reports Ray Chase at Bannon’s Camp. He said 21 boats launched Saturday. Shellcracker moving back to deep shell bars between new and full moons. Lily pads “thick” with panfish, which are hitting grass shrimp, red worms, and crickets.

Lake Pierce, daily limits of bluegill and shellcracker in lily pads on red worms and crickets at North Cove and around islands near the fish camp, reports Jennings Camp. Bass decent, especially when it rains every day.

Even Lake Hatchineha, a couple of shellcracker beds located over the weekend with a full moon, and anglers pulled in limits on red worms. 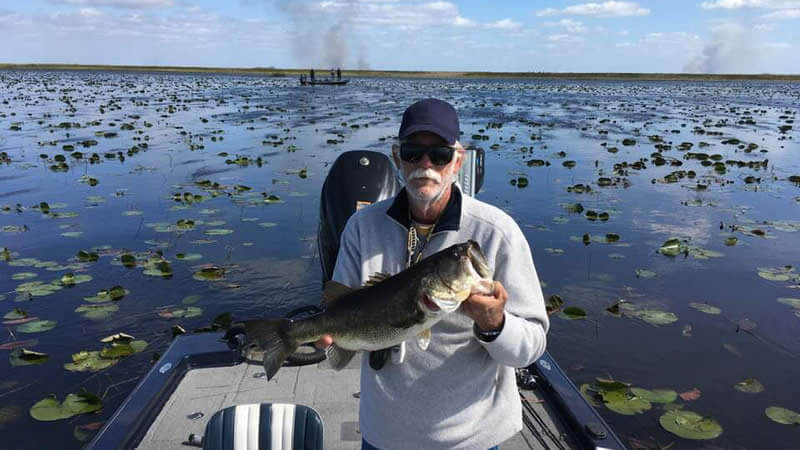 Big Lake Toho, giving up big stringers in tournaments on Saturday, but Sunday as bad as Saturday was good. Took about 24 pounds to win the Xtreme Series tournament. Fishermen casting topwater lures (chrome/black Boy Howdy or Devil’s Horse) around crisp hydrilla patches until the sun comes up, said Brent Howlett at Stone’s Outhouse. Water level up 8-10 inches in the past week, and anglers struggling for bites this week.

Always Lake Kissimmee, bluegill carried the weekend, although bass made good showing Saturday. There were two or three stringers over 20 pounds in tournaments on Saturday, but on Sunday, bass took a “nosedive,” said Leo Cosce at Camp Lester. Took just 13 pounds to win on Sunday. Cosce said there’s a lot of bass being caught on crankbaits and Rat-L-Traps. Trenton Bennett of Fort Meade, who’s 4, landed a 12-pound, 4-ounce bass fishing with his grandfather, Joe Bennett of Camp Lester, on July 13. Joe got the bite on a surface lure and handed the rod to Trenton. “That’s kid’s going to be hooked for life now. It’s great when you see that happen,” said Cosce. Limits of bluegill mixed with shellcracker around the full moon in lily pads at Gobbler Ridge, Philadelphia Point, Lemon Point, and Brahma Island. But panfish bite tapered off since Sunday with half-limits at best, Cosce said. Early risers catching 20-25 specks in North Cove with jigs (chartreuse/white, white/white) along hydrilla edges. Water level up 4 inches in the past week, but off-colored.

Unforgotten Lake Walk-in-the-Water, the lake is usually overlooked for bluegill, but panfish have been active in lily pads. Bass is not worth the trip.

Crooked Lake at Babson Park, extra-large speckled perch cranked up last week and still going at night on minnows in open water, reports Cindy Ritchison at Bob’s Landing. “Some of my anglers said they were catching ‘hellaciously’ big specks they said had to be a pound and a half or 2 pounds, easy,” Ritchison said. Mark Collier and his crew bring in 20-25 per trip, as is Gary Earnst of Plant City. Bass up to 2-3 pounds more common.

In the phosphate pits south of Mulberry and Bartow, things are about as quiet as they get with dog days set in.