Lake Haines can be found on the Winter Haven Google map below. Lake Haines is a lake in Polk County, Florida. The latitude and longitude coordinates for this lake are 28.0922, -81.7079, and the altitude is 128 feet (39 meters).

About the Lake Haines Area

In recent years Haines City has seen explosive growth, primarily because of its easy access to Orlando and Walt Disney World Resort. New residential areas have developed on the edges of the city. On high ground in the north of the city, Southern Dunes, a golf and country club with both vacation homes and residential homes, was developed between 1995 and 2005.

In 2004, unusually in a city so far inland, parts of Haines City experienced three hurricanes. Hurricane Charley passed through the town in August. Hurricane Frances came right on the heels of Charley but mostly just dumped a lot of rain. Hurricane Jeanne soon followed, packing a punch not quite as strong as Charley but longer-lasting. The city has since recovered. 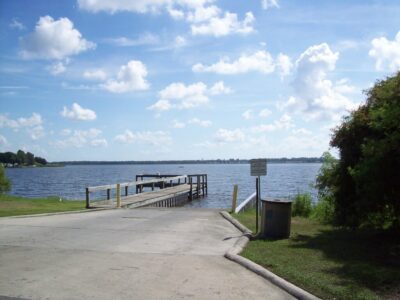 Fishing Lake Haines can be outstanding and very easy to figure out; it may help consult with local Orlando fishing guides and other internet resources before heading out to fish. Anglers who have fished Lake Haines are very familiar with the underwater structure of the lake. Good reviews from local anglers and fishing guides help make fishing information on BASSonline the best website for Florida freshwater anglers.

The city was platted in 1885, shortly after the South Florida Railroad reached the area. The city’s first nickname was Clay Cut, but there was no railroad station. It is believed that the inhabitants persuaded the railroad company to build a station by agreeing to rename their city Haines City, to honor a senior railroad official, Colonel Henry Haines.

The early settlers planted citrus groves, and citrus growing and processing became the city’s primary industry. From 1974 to 1986, Circus World, a theme park created by the Ringling Brothers and Barnum & Bailey Circus was open just north of Haines City. After Circus World shut down, Boardwalk and Baseball opened on the same site.

It featured carnival games and theme park styled rides like the Grand Rapids Flume. It closed in 1990, and the site has redeveloped as a residential and shopping complex named Posner Park.

Planning on going fishing and need a fishing license? Here all you will need to know about Florida Fishing License. What options, fishing rules, limits, and regulations. Please remember each local area has rules for Fish and Wildlife and is open to the public. Now, let’s go out there and fish!