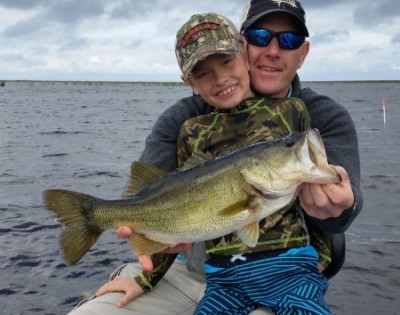 Lake Griffin State Park is located 2 miles north of the city of Leesburg, Florida and 30 miles south of Ocala, FL. The park is also within an hour of Central Florida. Lake Griffin State Park consists of over 425 acres of woodlands and freshwater swamp. Developed in the late 1960’s, the park has 40 campsites with water and electrical hook-ups, a boat ramp, picnic area, picnic shelter and nature trail. While not directly on Lake Griffin, the boat ramp provides access to the lake via powerboat or canoe. The park is home to the state’s fifth largest live oak tree, this mammoth tree measures over 150 feet tall and 10 feet in circumference. The Lake Griffin State Park is the freshwater swamp/marsh. Pedestrian access is not provided, but if you have a boat or rent a canoe, you can observe a wide variety of wildlife in their natural setting. Along the park waters that lead to Lake Griffin, visitors are most likely to observe osprey, bald eagle, blue heron, anhinga, ibis, American alligator, and river otters.

The lake is located approximately one mile from the park’s boat ramp via a canal and tributary. Some of the lake’s best fishing is between the boat ramp and the lake at times. A fishing license is required for everyone except children 16 years old and under and Florida residents 65 years of age and older. Because Lake Griffin is a fish management area, the cane pole rule does not apply. This includes all waters in the park.
Lake Griffin bass fishing, crappie, and catfish are just some of the fish that are waiting for the chance to snap up your bait. In addition, bream, bluegill and shellcracker are also present in the lake.

Lake Griffin is the last lake in the Harris Chain of lakes. Water flows into the Lake through Haines Creek and exits into the Ocklawaha River flowing north through the Ocala National Forest as it winds towards the St. Johns River and out to the Atlantic Ocean at Jacksonville. Until the late eighties, Lake Griffin was one of the best bass fisheries in the State. A host of problems contributed to the collapse of the fishery around 1990. A major contributor being the over application of herbicides which killed all of the offshore cover. Bass fishing remained poor until consecutive droughts lowered lake levels and allowed new weed growth to take hold. In addition, restoration efforts in the form of shad removal and run-off controls are starting to have a healing effect on the lake.

An additional benefit occurred in 2007 when the some of the small lakes near the Orlando airport were filled in because birds were interfering with air traffic. Some of these lakes had never been fished and contained many large bass. Dr. Canfield, a Professor at the University of Florida, was instrumental in convincing the authorities to relocate these bass to Lake Griffin. Two of these bass were reported to be in the 14 pound range.

At the same time, an agreement was finally reached with waterfront home owners to allow the State and Local Government to dredge the canals. The dredging began in early 2007. The water authorities also opened navigable entrances into two of the large restored marsh areas. Fishing in these revitalized marshes has produced a number of local and national tournament bags.

At this time, good catches of bass are occurring as eel grass, Kissimmee grass and hydrilla return. The water quality has greatly improved and we expect the lake to be an excellent fishery as restoration efforts continue. To learn more about Harris Chain restoration, Google “Harris Chain Restoration Council’s” website.