Explore Lake Trafford and the Corkscrew Swamp, Headwaters of the Historic Everglades on the West Coast of Florida just minutes from Naples, FL. View its creatures in their natural habitat while experiencing the thrill of an fishing or even 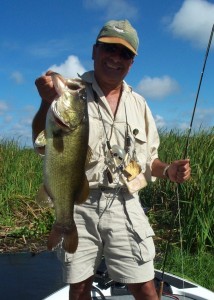 an airboat ride. Birds and Alligators flourish in the abundance of vegetation making it a birders heaven and a photographer’s paradise, but for anglers, it's both!

Lake Trafford is approximately 1500 acres of natural beauty. Located in northeast Collier County. Home to native birds, alligators, and other swamp creatures. Trafford is regarded as a premier fishing lake for most anglers, with it's Crappie, Bass, Bluegill and Shellcracker that all call the lake home…. Come try it for yourself and spend some time in one of the most beautiful areas of Southwest Florida!

Explore Lake Trafford Swamp, Headwaters of the Historic Everglades on the West Coast of Florida. View its creatures in their natural as wildlife officials are working to restore Lake Trafford in Collier County, and they are planning 50,000 bulrush plants that will help accelerate the fish population process. These plants create a desirable habitat for bugs, fish and other wildlife.

Enjoy the mom & pop feeling of old rustic Florida it is still alive, the natural beauty and colorful characters make Lake Trafford a unique stop on any day.

Immokalee’s forefathers root back from settlers of both British and Scottish descent. Like many early settlers, these Europeans were in search of a better life. Joseph Woodwind left Bristol, England when he was fourteen. He boarded a ship carrying laying cable from Punta Rassa to Cuba in the mid-1800s. Goodwin did not like sea travel, so he jumped ship and hid in Cuba until the ship left the area. Goodwin then boarded another ship and returned to Florida.

When Joseph Goodwind reached Florida, he took on the name William Brown. He traveled across Florida exploring the wild terrain by oxcart. He hunted and traded goods with Indians in exchange for furs, which he sold in Fort Myers. Brown married Jane Jernigan of Fort Myers in 1879, together they had ten children. The life of traveling and trading became too much for this large family, so they decided to settle down around 1890. The area they chose was near the Alligator Alley; today it is called the Big Cypress Preserve. In the early days of Florida, much of the area was wetlands, and the spot that Brown chose was called boat landing, it eventually became Bill Brown’s boat landing which is still found on maps today. The landing was on the canoe routes used by the native Americans and white men, which made it the perfect place for a trading post. Brown did much trading with Seminoles and his children grew up with Seminole children. Brown’s third son Frank became a close companion with a Seminole boy named Josie Billie, who taught him how to speak Seminole. Billie went on to become a great medicine man.

Years later, Brown sold the landing to a missionary group and moved to Gopher Ridge. All of the children went except for Frank who stayed on the reservation and was appointed one of the areas first "Indian agents" in 1918. In Gopher Ridge, Brown opened one of the area's first stores. He traded goods with the Seminoles and generations later, they continue to live in Gopher Ridge, which is now known as Immokalee.

The Pepper Ranch has been located on Lake Trafford since the mid-1920s. In an interview with Gene Hearn of the Pepper Ranch family, he reminisced about his family’s ties with Immokalee and Lake Trafford. His grandfather, Frank Pepper, moved to the area in the 1920s during the "boom and bust days"(Hearn 4/18/00). It was in the boom and bust days that men and women moved to Florida to buy land to build on, so they would spend a lot of money on land, but oftentimes the deals would bust. The deals would bust because in the 1920s and 30’s people did not like Florida. They thought it was too hot and mosquito-infested. The land was pretty inexpensive, so Pepper bought 2500 acres of property surrounding Lake Trafford. He bought it from Henry Flagler, who was a hotel man. Flagler came to Florida to build hotels and brought the first railroad line into the state for transient guests.

The Pepper family used the lake and the land for Fish Camps in the mid 20’s to late ’30s. Visitors would come to the lake, stay in cabins on Pepper property, and fish Lake Trafford all day. The camps stopped being used when Pepper’s brother died because no one wanted to take care of the project. In the mid-’40s, Pepper’s grandfather donated 10 acres of land to the county to be made into a park. When the surveyor began to work on the project it was realized that the team had surveyed the wrong ten acres, but the other property owner didn’t mind, so both the pubic area and Lake Trafford Marina sits on the surveyed land today.

The Lake Trafford public boat launch area and pier is owned by Collier county park and recreation. It was open to the public in the early ’60s. The boat ramp was originally where the pier is today. It had to be moved to its current location because 5 cars went over the edge within a few years. The Collier family owns most of the land surrounding the lake. Ski and Annie Olesky own the marina and the surrounding camp sites. Originally the land was owned by 10 investors from Naples. The shareholders were going to use the property for a bass-fishing club in the ’70s, so they built the marina. Something fell through with the club, around the same time that Ski got involved. Ski was unsure why the bass club never worked out, but it benefited him because the shareholders wanted to sell. He bought shares from two of the ten people in the early ’70s and was then asked to run the marina. He had no business experience but decided to try it out. It was a difficult transition, but the years pad off because he bought shares from the remaining holders is the sole owner of a thriving business.

The best fishing holes can be found by contacting local bait and tackle shops, and going fishing with our guides. Largemouth bass can be readily accessed from pier or boat, with prime fishing being during daylight hours. Focus your effort in shaded areas near a structure, and use top-water lures, minnow-like crankbaits or small golden shiners. Light tackle works best.

We at BassOnline.com encourages anglers to practice catch-and-release when fishing for any bass. Overall, this species is a hearty fish and nearly 100 percent will survive being caught and released when properly handled. However, the bass does not survive as well in live wells or as long out of the water as some other fish. It is important that they are released quickly to maximize their chances of survival.

Lake Trafford
Wednesday, December 18, 2019
★★★★★
“ Called up Bass Online and provided all the details I need to book a Lake Trafford fishing trip with Captain Mark. Used live bait to land some nice bass. My husband and I had a really great time and looking forward to coming back!”
- Sandy Williams
To Read ALL SITE Reviews Please Click Here!