East Lake Tohopekalgia (usually shortened to `Toho’), and not as popular as its more famous cousin, West (or Big) Lake Tohopekalgia. While they are located almost adjacent to one another and connected by a canal. As most lakes, each of 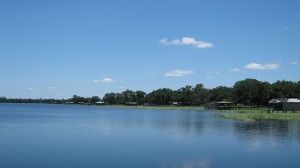 these two lakes are very different and have their own hotspots. West Lake Toho is different do to the islands, flowing feeder creeks and big coves with normally clear water and a tremendous amount of vegetation.

East Lake Toho, on the other hand, is exceptionally clear, often with great visibility to depths up to 10 feet. It contains much less vegetation than West Lake Toho and, with the exception of its northwest corner, the existing growths are basically confined to a narrow band of perimeter reeds and Kissimmee grass. While water-color is still the same tannic acid rain color common to most of the lakes, rivers, and canals of Florida, the lesser vegetation results in only a noticeable color rather than a dark stain. East Lake is nearly circular in shape and covers approximately 12,000 acres. It is a perfect example of what is often called a `soup bowl’ lake. There are no continuously flowing tributaries, which helps the lake level by maintaining the influx of water to the upper watershed lakes.

The St. Cloud Canal exits East Lake Toho in its southwest corner and connects to West Lake. The canal is navigable for a short distance but has a lock (number S-59) which is not impassible by boat. C-29 canal connects East Lake, through Fells Cove and small Ajay Lake in the northeast corner, to the upper watershed lakes of Hart and Mary Jane. These two bodies are the actual start of the famous Kissimmee waterway, which eventually stretches its way South to sprawling Lake Okeechobee. Navigation is limited but possible, up to lock number S-62 at Lake Hart. Runnymede Lake, a small shallow body, lies just off the southeastern rim of East Lake Toho and feeds into the main lake by way of a navigable, connecting canal. 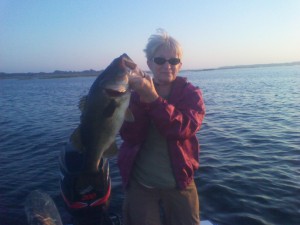 With an average depth of 10-14 feet, and a maximum of 18 in one small location, the East Lake Toho bottom is predominately clean and hard. A few good shell beds exist, as well as some bottom rock structures. The latter is somewhat difficult to find but is well worth the effort when you do. A heavily weighted plastic worm is the best rig to use for locating these rocks, as well as the shell beds.

East Lake Toho has a couple of these rock areas that can be found in the close proximity of the single fish attractor located in the northeast corner of the lake. Forget using the fish attractor as an indicator of artificially placed brush tops. Instead, use it as a reference point in the search for the rocks. One `patch’ of rock will be found approximately 30 yards West of the attractor marker, at a depth of 10-12 feet and adjacent to a small two-foot drop-off. The depth sounder will show the surrounding area to resemble the start of a small gully running to the West, towards the deeper water. Another area of either small gravel or shells lies directly in front of the St. Cloud canal and approximately 300 yards out into the lake. There is no reasonable way to locate this open water feature consistently, short of a good depth finder unit. You can use a heavy, one-ounce slip sinker and a Carolina rig worm and just `feel’ the bottom until I locate the hard, rough bottom. This particular place has always produced bass, so it worth the effort to locate each time.

There is apparently no open water vegetation in East Lake Toho, save the small strips of shoreline cover. However, in the northwest corner of the lake, the Boggy Cove area provides a large concentration of reeds, pads, and grasses for the shallow water purist who desires to `fish the cover’. Likewise, the connecting neck between the main lake and Fells Cove contains a bountiful amount of growth cover. Let’s take a tour of East Lake Toho and note the specific landmarks and characteristics of this fine body of water.

To either side of the mouth, we find the same stands of reeds that ring the lake. And, when the water is flowing past them, they form excellent ambush points. A plastic worm, or a floating Bang-O-Lure, usually work best in these locations, with the former being the better choice. An important point to note is that the bass does not always take up the position in the canal or along the edges of the reeds when the water is being pulled through the lock. Quite often, they will school in the open water just in front of the canal opening. When this is the case, the fish usually give themselves away by chasing bait fish on the surface. The top lure for these conditions is the vibrating crank plug, such as the Bagley `Shad-A-Lac’ and Lewis `Rat-L-Trap’.

A tip worth its weight in 10-pound bass is that the plastic worm also has an excellent application in this open water location. Once the surface action has ceased, try tossing a lightly weighted plastic worm into the same area. Normally, the bass is still there and has just settled to the bottom in wait for the next baitfish school to happen by.

Moving up the West shoreline, there is little deviation of any significance. All we note are the standard East Lake reed band and minor grasses along the shore. Experience has shown, however, that any indentation or protrusion of the reed-line, no matter how slight, has the potential to produce fish. Be particularly attuned to the protrusions of reeds out towards the open water, as bass like to set up ambush points at these type locations.

The open water pockets within the Boggy Cove growth will normally have hydrilla and coontail moss under the surface. A spinnerbait and topwater lure are good choices here. In this one section of East Toho, we often find a concentration of small chain pickerel and they all seem to fall in love with white spinnerbaits. Although they have too many bones to be easy eating, the pickerel are game fighters and their fillets very tasty when rolled in cornmeal and deep-fried. The bass spawning season will find largemouth occupying their beds along the outer reeds of the Boggy Cove area, as well as within the open water pockets of the growth. Most beds are usually found in relation to the reeds, but some will be on clean sand in the lily pads.

These exact same locations will hold huge schools of spawning bluegills and shellcrackers in the June-September timeframe, with July and August being the prime months. The better places for these panfish will be within the interior of the Boggy Cove cover. The northern shoreline of East Lake can be good for bass angling and has the advantage of warming more rapidly in the early Spring. This means that bass spawning will usually begin earlier than in other parts of the lake. Additionally, the effects of the brisk, northerly winds of late Winter and the coming Spring will be lessened along this section of the lake. There are two major fish camps along this shoreline, just off paralleling Highway 530.

Fells Cove occupies the northeast corner of East Lake Toho. The connection between the two bodies is a boat trail running across a wide expanse of reeds, pads, and grasses. Usually, there is too much boat traffic and it is too narrow to fish in the trail. However, during the more undesirable times to be on the water (i.e., rain, cold weather), the edges of this vegetation slash can produce outstanding bass action. I particularly like to fish it during extended periods of foul, rainy weather when the high-powered, `go-faster’ pleasure boats are all on their trailers in someone’s garage. The water in the boat trailer is deeper than in the adjacent areas of vegetation and that answers `why’ the location holds fish.

The East Lake Toho bass of Fells Cove can often be located on hard bottom areas or shell beds in the open portion of the lake, normally in the deeper sections towards the Westside. Since the lake is relatively small, a quick way to locate these fish has been to troll. For control purposes, we like to use only a short line and a fairly deep-running plug. A Rebel Deep Wee-R or a Bagley DB-I will run approximately 10-11 feet deep on 60-70 feet of a 12-pound test line, which is the general depth we want to work. Once we locate the bass school, we drop a reference marker buoy and simply cast to the fish. Remember not to place the marker directly on the school location, as you may spook the school or take the chance of tangling a lure in it later. When fishing a school of bass, such as found here, do not return any fish to the water until you are ready to move off the school location. Otherwise, the released bass may return to the school and his nervousness causes it to spook and move away. A short distance down the East Lakeshore below Fells Cove, we find a few buildings visible in the trees. The local people refer to this a the Boy Scout Camp and its significance to us is as a reference point. One-half mile south of the Camp and one-half mile West into the lake, we find the fish attractor and associated rocks that were mentioned earlier.

The East Lake Toho east shoreline should be approached the same as the others, in that the angler would be wise to the key to the small pockets and protrusions of the reed line and grass. Small Runnymede Lake lies just of the southeast corner of East Lake Toho and has a connecting canal. The reeds and grass on both sides of the canal mouth are fairly productive bass locations. The deeper water drop-off, out in front of the canal mouth, can be even better. Watch for a few surface schooling bass on East Lake Toho.

At the very South end of East Lake Toho lies a public launch ramp and parking area. It is protected from the winds by a dike, which often produces a few bass. Always fish it with a plastic worm, especially on Sundays and early in the week. If a tournament was held out of this launch area over the weekend, they released their fish here and you can probably catch a few of them.

The better times to fish East Lake Toho for bass are during the months of December through March, with live wild shiners being the most popular lure. Artificial’s work best in October and November and again in March through early June. Spinnerbaits and topwater minnow imitations, such as the Bang-O-Lure and Rapala, are top local choices, with the reliable plastic worm being second. Hot weather is flipping time for bass, so go to East Lake’s thickest cover or offshore shell beds and rocks. Speckled perch (crappie) fishing picks up in the late Fall, just after the first cool nights arrive, and improves up to and through the Spring spawn. Spawning usually occurs in late January through March, when the fish will be found in the reeds and standing grasses. At all other times, the crappie will be schooled in the open water and must be caught by drifting small minnows and jigs. During the hot months, drift the baits at 12 feet (or two feet above the bottom) in the deepest parts of the lake. Just before and after the spawn, look for them to be 5-7 feet deep more near the shorelines. East Lake Toho is the `sleeper’ in Central Florida lakes in Florida. It produces many trophy bass annually and is an excellent crappie lake also.

Fish it on weekends