Holey Land Fees No Daily-Use Permit currently required. To hunt or fish, you must possess the appropriate license and permit.

Area 3 & 4 if Rotenberger flows are insufficient and the deliveries’ water quality is assumed to be acceptable. These new lakes will help improve water depths’ timing and location within the Holey Land Wildlife Management Area. Eventually, South Florida Water Management started the Holey land project and helped turn it into a world-class fishery for many anglers.

The Holey land management area consists of canals surrounding the area that support many species of game fish, including largemouth bass, bluegill, and other species of sunfish and catfish and several species of exotic fishes. The canal system also serves as a refuge for smaller fish species during periods of severe drought. These forage fish are an essential part of the prey base for many species of wading birds. Reference the map below of Holey Land to locate boat ramp(s). Fishing license information.

Levees are the right places to view wildlife. You may encounter white-tailed deer, raccoons, common opossums, armadillos, river otter, bobcats, rabbits, and rats—swallow-tailed kites, red-shouldered hawks, and many migratory birds during the winter months. Wood storks, ibises, great blue herons, snowy egrets, and cattle egrets are common. The endangered Florida panther may be an occasional visitor to the area.

Alligator – The American alligator is one of the most commonly seen wildlife species in Florida. Alligators and other crocodilians are the only living Archosauria, the ancient group that included dinosaurs. They have many features more similar to birds or mammals than to other reptiles. The snouts of alligators are broad and rounded, whereas those rarer crocodiles are longer and more pointed. 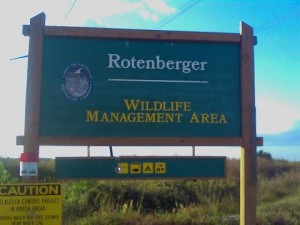 Alligators play a crucial role in the Everglades and other wetlands. During times of drought, they dig holes that fill with groundwater. During dry periods, these alligator holes are an essential source of fresh water for birds and mammals and are critical to many aquatic species’ survival. Since 1988, the Florida Fish and Wildlife Conservation Commission has held public water – alligator harvest. Each year Alligator Harvest Management Units, including the Holey Land WMA, are established with conservative harvest quotas.

Fees No Daily-Use Permit is currently required. To hunt or fish, you must possess the appropriate license and permit.

Facilities Holey and has two boat ramps, both noted on the map below. One dirt ramp rarely used, the other a new two-lane boat ramp good for any boat with dockage.

Public Access Persons must enter and exit the area from the L-5, or Miami Canal levees only.

When hunting ducks and coots in season, they use Airboats. Individuals selected to participate in the public waters alligator hunt may operate an airboat to take alligators (Alligator Hunting Information).

Vehicle use regulations: No motor vehicle shall be operated on any part of any wildlife and the environmental area designated and posted as “CLOSED.” Because of inclement weather, poor road conditions, construction, management activities, or wildlife surveys.

No person shall park any vehicle in a manner that obstructs a road, gate, or fire lane. The use or presence of vehicles on wildlife islands, tree islands, or tree stands is prohibited. All vehicles are prohibited from the end of the established duck and coot season through April 30. Airboats are allowed during this period. Vehicles are prohibited on all levees except L-5 and Miami Canal levees.

From Clewiston – Take US 27 south to Palm Beach/Broward County line. From the county line, take L-5 levee west approximately nine mi to the first access point, which is on the levee’s north side.

From Ft. Lauderdale – Take I-595 west to I-75 north. Take I-75 north to US 27. Take US 27 north to Palm Beach/Broward County line. From the county line, take L-5 levee west approximately nine mi to the first access point, which is on the levee’s north side.

Only a century ago, the southern third of Florida was an unwelcoming wet wilderness. Lake Okeechobee was near twice the size it is today. From the lake, water crept southward down the peninsula through swamp and sawgrass. Rainfall that did not soak into the underlying limestone sat on the nearly flat land. The only dry places were on the Atlantic coastal ridge and the

Indians inhabited south Florida even before wetter climatic conditions set the beginning of the Everglades 5000 or so years ago. Indian cultures were established when European explorers arrived in the 1500s. And people lived by hunting, fishing, and gathering wild foods. Villages around Lake Okeechobee may have grown corn, at least for a time. Most of the Indian population was in villages near estuaries and on the coastal ridge. People traveled from these villages back and forth to camps in the Everglades to hunt and fish, much as modern urban dwellers continue to do today.

In 1948 Congress authorized the Central and South Florida Project to protect agricultural and urban areas from flooding and serve as a freshwater source for what was fast becoming the heavily populated Gold Coast.

Construction of canals, levees, and water control structures began in 1949 and completed in 1962. These structures have altered the natural hydroperiods and disrupted sheet flow from Lake Okeechobee to Florida Bay. On some portions of the area, drained land was used for sugar cane cultivation or cattle ranching.

Holey Land derived its name because it was used as a practice bombing range during World War II and littered with bomb craters.

We at  BassOnline.com encourages anglers to practice catch-and-release when fishing for any bass. Overall, this species is a hearty fish, and nearly 100 percent will survive being caught and released when adequately handled. However, bass does not stay in live wells or as long out of the water as some other fish. They must be removed quickly to maximize their chances of survival.