At Hot Rods & Reels, NASCAR drivers team up with NHRA Hall of Fame drag racer Darrell Gwynn to raise awareness of spinal cord injury research and people living with paralysis, and to donate a custom wheelchair. Each wheelchair is presented and donated to a recipient in dire need. After careful selection, our recipient was a great candidate for this year’s wheelchair. 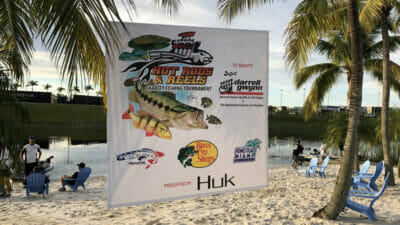 The Darrell Gwynn Quality of Life Chapter of The Buoniconti Fund to Cure Paralysis also teams up with Bass Online Fishing Charters, Guides, and Tours to create and put on one incredible charity event. Without these captains, the event would not be possible.

Every November, for the past 16 years, NASCAR’s final race of the year was in sunny South Florida. Each race weekend opens with our NASCAR charity fishing tournament in Homestead-Miami, FL. There is no better way to start your weekend than in the great outdoors catching fish.

Friday morning brought about some beautiful weather in Homestead, FL. During the early morning hours, captains, guides, and fishermen were lining up for registration. As the sun came up, everyone was getting excited about what the morning had to offer. The peacock bass in Homestead-Miami Speedway’s lake was the main target for this incredible charity event.

As the captains drove their trucks and boats onto the track and into the infield, the energy was rising. You can almost feel that something magical was going to happen. Even though this is all for charity, competition always fuels the event. The question was what driver, owner, NASCAR affiliate, was going to get their name on the Hot Rods & Reels Charity Fishing trophy?

After a nice lake-side breakfast, courtesy of Homestead Hospital, the fishing event was about to begin. Before the fishing could begin though, the most important part of this whole day had to happen: the Wheelchair Presentation.

One of the main reasons why Darrell and his Chapter puts on this event is to present/donate a very expensive wheelchair to a recipient that has been recently paralyzed. This year’s Done was someone special and in great need of an upgraded chair. His name was Jean Saint-Ange!

“On August 25, 2018, Jean Saint-Ange was in a devastating accident when he sustained a fall while trimming a tree in his family’s backyard. As a result, he suffered from several fractures and underwent several surgeries to his lower extremities and his spinal column. He was in critical condition at the trauma center, fighting for his life for four months. This accident ultimately changed his life forever, leaving him completely paralyzed from the chest down and confined to a wheelchair. He currently needs around the clock care and resides in a long-term care facility. Since his injury, he has been doing extensive therapy in hopes of regaining the use of both of his hands and to walk again.

Prior to his accident, Jean was a full-time head chef at a local Caribbean restaurant and fulfilled the role as the sole provider for his family. This hard worker is determined to regain his independence and be a prominent figure in his family once again. This wheelchair will not only help him physically but mentally as well. He is beyond thankful to the Darrell Gwynn Chapter of The Buoniconti Fund for making this gift possible.” 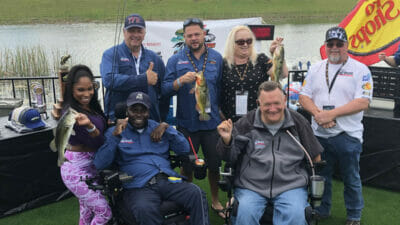 The Hot Rods & Reels Fishing Tournament is very unique in the manner that before the activity or event starts, you know why and what the event was for. Jean was very excited and beyond

thankful for this life-altering donation. Everything was changing rapidly for this young man. Jean even had the ability to get out on the water with Darrell Gwynn on Captain David Rhoden’s

pontoon fishing vessel, which made for a great addition to the tournament.

So as the NASCAR drivers, sponsors, guests, and captains boarded the fishing vessels, they were all fired up to get this event started. South Florida’s finest freshwater captain guides were there to donate their time to such an amazing cause. They had 1 hour and 30 minutes to catch the biggest 3 bass limit. Everyone cruised to their fishing spot and in just seconds, fish were making their way to the boats.

The Miami-Homestead Speedway has a 7-acre spring-fed lake that holds some great fishing for exotic bass fishing. During this event, you can get the chance to catch a Florida peacock bass along with largemouth bass, cichlids, catfish, and more. At each event we get to see catches of all sizes, especially this one in 2019.

As the horn blasts, it is a sign that the tournament has concluded. Everyone makes their way back to the beach where the weigh-in stage is located. The crowds congregate and everyone is getting excited to see what fish were weighed in.

Each driver and fishing team slowly started weighing in fish from their time on the water. We started to see some bigger bags and bass coming in. Anglers and drivers were also bringing in big catfish that were caught.

Retired Driver and Team Owner, Richard Childress was coming up to the stage next. He was the last driver and team to weigh-in and there was a smile on his face that was very suspicious. No one could expect what unfolded next.

Bass Online’s Captain Wayne Fellows took over holding the bag open. They pulled out a smaller peacock bass along with a giant catfish. Once confirming that the catfish was not allowed to be weighed, all of a sudden a second bag was brought to the stage. 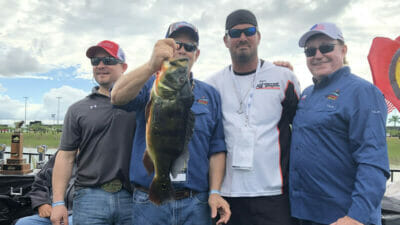 The first fish pulled out of the bag was a gorgeous peacock bass weighing in at 3.5 pounds. It was the biggest bass of the tournament so far. As everyone was still excited for the last fish, the angler reached into the bag and pulled out a GIANT Crowd shocking peacock bass.

Everyone in the crowd uproared with amazement and excitement after landing their eyes on this fish. It weighed in at 7.7 pounds and it was the biggest peacock bass ever caught on this lake. Richard Childress along with Bass Pro Shop’s guest anglers took home the trophy with a combined score of 12.84 pounds for their 3 bass limit.

As well, they cashed in on the big fish of the tournament. This meant that they solidified their chances at ONE MILLION DOLLARS. Huk, a presenting sponsor of this tournament does a challenge where you pick an envelope from a collection of them. Inside, you can win one million dollars in the Huk Million Dollar Challenge.

The angler that caught the big fish in this tournament gets awarded to select an envelope. Unfortunately, the envelope that was selected did not have the million-dollar ticket in it.

Overall, everyone on the water had a great time and caught a lot of fish. The size may not have been there but that is what fishing is all about. Now, all anglers and drivers will be fired up to come back to Homestead Speedway to chase down the giant of the deep.

Everything is changing next year. NASCAR changed its schedule around and is now going to have this tournament in March. It will be right after the Daytona 500, the first race of the season. As a result, you will get more interaction with drivers and sponsors as all of them will be in Florida already. 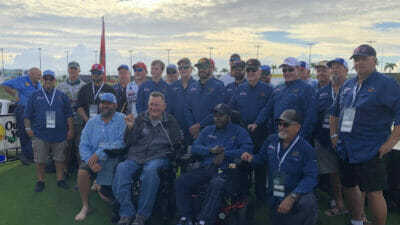 We are looking forward to seeing what 2020 brings, especially for the upcoming NASCAR Charity Fishing Tournaments. If you are interested in participating in this event as a sponsor, feel free to reach out to the Quality of Life Chapter. They can provide you all the information that you will need to make this event happen for you. We would love to get you on the boat and we would love for you to be part of finding a cure for paralysis.

We would also like to thank all the help and sponsors that were part of this event and made it possible: YETI, Miami-Homestead Speedway, Seminole Hard Rock Casino, Homestead Hospital, Joe Coulter, Robert Clarke, and so many more!

If you enjoyed this post about South Florida Fishing, you might also enjoy this fishing report from the same area.