Before Kyle Busch raced his way to the 2015 Sprint Cup Championship finish at the Homestead-Miami Speedway last week, NASCAR Drivers were racing up and down the infield lake for a different championship at the annual Hot Rods and Reels Tournament on November 21st.

Hall of Fame Drag Racer Darrell Gwynn was joined by some of his NASCAR friends Saturday as they came together to benefit The Darrell Gwynn Quality of Life Chapter of The Buoniconti Fund to Cure Paralysis. The annual event combines some of the best NASCAR drivers with the leaders in spinal cord injury research to help raise much needed awareness and funds to find a cure for paralysis.

“Each year our friends from Homestead-Miami Speedway and NASCAR come out and support this event and we couldn’t be more thankful. Through these events, we are changing the way the world looks at paralysis and making a difference in the lives of those who are paralyzed,” Darrell said.

The catch and release fishing tournament had drivers and fans compete side-by-side with prizes for the most combined weight among the top three fish and the heaviest bass. Right as the countdown hit zero Ryan Newman struck first with a solid largemouth bass. Just after that, multiple competitors began scoring with two or three fish hookups on several boats. In the first few minutes, every boat had largemouth or peacock bass in the live well.

As the boats spread out over the infield lake, other drivers and their families came out to watch the show. Richard Petty came by on his custom cart for a

few minutes. In the background, the big jet driers were on the track drying the surface from a wet morning, reminding everyone there was a race later that afternoon.

As weigh in approached, the boats made their way to the beach. With so many fish caught, it was anyone’s tournament. One by one the participants weighed their catches. Martin Truex Jr. and his team garnered third place with a total of 5.25 pounds. Second place went to Joey Coulter and company with Joey landing the heaviest bass of the day at 3.21 pounds and 5.77 over-all. This year’s Tournament Champions were David Gilliland’s team who had three fish weighing 6.19 pounds.

Dave Blaney fishes this tournament almost every year. “We’ve known Darrell and his family for years and this event is probably the only time I get to fish all year” Dave said. “Its always a great time and a great cause, and my son Ryan was here fishing with me today so it was a lot of fun”. Ryan Newman participates in this event every year as well. “I caught a 6 pound peacock bass here last year”, Ryan confessed. “I carry a little Coleman three piece boat to fish all the track lakes”.

Even before the event was officially over, many of the drivers left as they had practice runs on the track. That is a testament to their commitment to this important cause. To find out more information on the Darrell Gwynn foundation or how to participate in the tournament, visit http://www.thebuoniconti-fund.com/hotrodsandreels.

← Prev: We had an awesome trip today in Orlando! Next: Fishing with Rich Water and Steve on Lake Okeechobee → 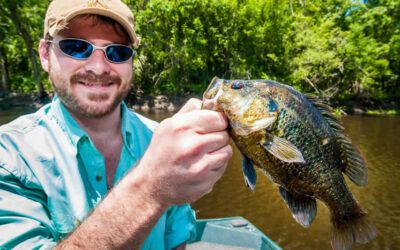 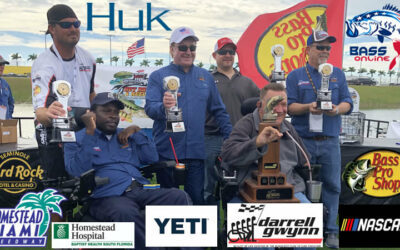