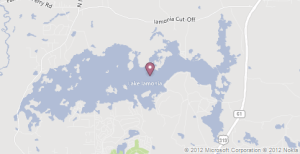 Lake Iamonia is located in the Red Hills Region and is approximately 5,757 acres (23 km²) in size and is 7 miles (11 km) long and up to 2 miles (3 km) wide. It has a drainage basin of roughly 101 square miles (260 km). Located by County Road 12, which runs along the northern part of the lake. Tall Timbers Research Station and Land Conservancy is situated on a bluff on the north side of the lake. The eastern side borders near highway US 319, the south side is bordered by the developments of Killearn Lakes Plantation and Luna Pines. The west side edges near State Road 155 (N. Meridian Road). The highest elevation around the lake’s basin is 220 feet (67 m)

The bottom of Lake Iamonia is north of Tallahassee, it is cleaner than it’s been in years thanks to a host of volunteers, county and state support.

Lake Iamonia (pronounced Ammonia) derives its name from the Seminole Indian town “Hiamonee” which was located on the banks of the Ochlockonee River. Lake Iamonia is a prairie lake, which means a shallow lake that empties naturally during dry periods, allowing plants to flourish on the nutrient-rich lake bottom. Prairie lakes eventually return to their watery state when wetter conditions prevail. Prairie lakes often have sinkholes, and Lake Iamonia is no exception. A dam was built in 1938 to prevent the lake’s water from flowing into the natural sinkhole. However, by 1980 the dam was declared unsafe by the Northwest Florida Water Management District, so the gates were raised to let nature take its course. The gates were removed in 2007. Naturally fluctuating water levels are now considered the healthiest fish environments. The Florida Fish and Wildlife Conservation Commission has used dry periods on Lake Iamonia to remove sediment from the bottom. About twice a year water from the Ochlockonee River spills into the western portion of Lake Iamonia.

Fishing Lake Iamonia is a popular pastime, and the lake specializes in prize catches of bluegill, black crappie, and largemouth bass. Shallow depths allow for aquatic plant growth, providing the ideal living conditions for the myriad fish that live beneath the clear waters. Hiding among reeds and lurking below lily pads, the fish have found a habitat rich in nutrients and hiding places. So drop your line into Lake Iamonia, drift as close to the reeds as you dare, and get ready to fill the skillet with savory fish caught right here at the lake.

Cleaning up the lake was the idea of Florida Fish and Wildlife Conservation Commission (FWC) Officer Charles “Bucky” Higman, a 32-year-veteran officer who lives in Tallahassee, and Katie Woodside, an FWC freshwater fisheries biologist. Higman reached out to Josh McSwain, supervisor of parks for Leon County Parks and Recreation, and about 20 FSU students wanting to take part in community service work.

The group collected more than 2,500 pounds of litter, including cans and bottles, bait cups, broken chairs, and even a recliner. The litter had been left on the banks of the receding lake by anglers over the last one to two years.

At full pool, Lake Iamonia covers just over 5,700 acres. It now covers approximately 200 acres, due to below-average rainfall in the area.

Hydrologists say Iamonia and several nearby lakes are “perched” lakes. Perched lakes sit over a thin limestone shelf over the Floridan aquifer. Also called karst formations, perched lakes typically have sinkholes. During a drought, when the water table drops, the water leaves the lake through the sinkholes.

“Our hope is people will help us by taking their trash and empty containers with them,” Higman said. “This is a wonderful resource and we need everyone to help keep it clean.”

While the lake is down, the FWC is working with contractors to remove approximately 24 acres of decaying organic material down to the mineralized soil. When normal rainfall returns, fisheries biologists say that many types of fish need the clean lake bottom for spawning and feeding.
Read more: Floridasportsman.com