If even the darkest nights have clammy feelings, while the cloudless skies of day look upon the current drought have been absolutely golden for fishing in the Florida Everglades.
“Right now it’s really good,” said Ralph LaPrairie, a Florida Fish and Wildlife Conservation Commission fisheries biologist. Great angling in the Everglades water conservation areas is an annual spring phenomenon that is better than ever this year, due to drought. The water conservation areas are vast marshes that support millions of fish over a total of 1,291 square miles. The spring dry season brings the drying of the marshes lands, and all the fish in them are crowded into 2,000 miles of man-made canals that slice through the system. 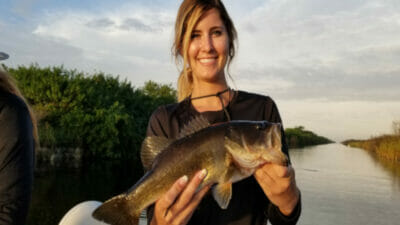 A recent canal sampling survey by The News-Press produced a bass, bluegill, a Mayan cichlid, warmouth, and an oscar on not many more casts than the five it took to land each scrappy fish, all within hearing distance of Everglades Holiday Park off State Road 27, south of Alligator Alley in Fort Lauderdale. Within the first hour, two other bream species – stump knockers and shellcrackers (redear sunfish) – were added to the species count. At one point Ralph Allen, who was fishing with a bead-head olive wooly bugger fly, said, “I can’t remember the last cast that didn’t draw a strike.” That was not an exaggeration. Allen is an inveterate counter, announcing every fish landed from the back of his Gheenoe. But eventually, he was overwhelmed by his own sheer number of successes. Fishing in the Everglades is a numbers game.

The area is known for its quantities of fish, rather than for their size. In the Sawgrass Recreation Area along U.S. 27, LaPrairie said electroshock sampling was producing 300 to 400 bass per hour – “a phenomenal number.” He collected a few of about 7 pounds and suspects other big fish were in water deeper than that effectively sampled by electroshocking. Most of the bass are less than a foot long, but there are notable exceptions. Many local bass fishing guides reported, said local guide Brett Isackson and Tony Masiello a recent customer who caught several bass in the 4 to the 8-pound range while fishing with us.

The fabulous fishing in the Everglades, which offers a choice of many canals within many miles of the free boat ramps, is no secret.

Many fish for bass early and late in the day, and catch panfish when the sun is highest.

“We like the bass,” Randy Reavis said. “We throw them back until the last day, and then just put a few in the cooler to take home.”

There is no shortage of bass boaters who take advantage of the bass fishing out in the Everglades. But fancy boats aren’t always necessary, but as Brett and Tony mentioned, It does get you out to the big bass that sees less pressure. Boats aren’t actually necessary at all locations in the Everglades. Dozens of anglers fish from shorelines, docks, and banks.

As one angler said, “You can come out and fish by yourself, and it’s safe,” she said of the park environment. Plus, she noted, the park restrooms and restaurants are very convenient in most locations.