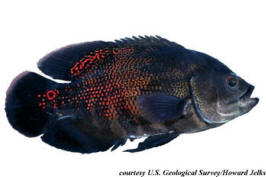 Anybody who has been keeping fish for a while will agree that this
Species: Astronotus ocellatus

A Oscars lifestyle is highly addictive. Once you’ve caught one fish, you’ll want another, then another and then another. Oscar fishing can be so addictive that many people end up with more than one in there boat or frying pan. We hope that both existing Oscar fisherman and newcomers alike will find this website interesting and helpful for catching more fish.

If that isn’t enough for you, we also have a forum where you can socialize with other members whether it be asking questions, helping someone out with lure question they may have, or you can just use it to chew the fat if you like. We have lots of guides/members who have a very good knowledge of catching Oscars. If you want a quick, accurate polite reply then please register with us and you will have full use of the forum.

Fishing advice is given as a guideline only. Our guides & myself are trained professionals, while the majority of our members are not trained. For a reliable technique, I would suggest you seek advice from a trained fishing guide. They can be found through South Florida, places like Everglades, Miami Lakes, Tamiami trail among others.

If there is a particular category or subject you are looking for, then using the search box will make life a little easier for you. If you look in the top right-hand corner of the website, you will see a search box. Enter a phrase or word that corresponds to what you are looking for and click the bassonline button to search with-in the website only, then press the “Google Search” button. You will then be taken to a page that will list all the matches to your phrase/word on this website.

Now for more detail specifics about the Oscar:

The Oscar is a species of fish from the cichlid family known under a variety of common names including oscar, tiger oscar, velvet cichlid or marble cichlid.In South America, where the species naturally resides, A ocellatus are often found for sale as a food fish in the local markets. However, its slow growth limits its potential for aquaculture. The species is also a popular aquarium fish.

A. ocellatus have been reported to grow to a length of 45 cm (approximately 18 in) and a mass of 1.6 kg (3.5 lb). The wild caught forms of the species are typically darkly colored with orange ringed-spots or ocelli on the caudal peduncle and on the dorsal fin. It has been suggested that these ocelli function to limit fin-nipping by piranha which co-occur with a ocellatus in its natural environment. The species is also able to rapidly alter its coloration, a trait which facilitates ritualized territorial and combat behaviors amongst nonspecific’s. Juvenile A. ocellatus have a different coloration to adults and are striped with white and orange wavy bands and have spotted heads.
Distribution and habitat
A. ocellatus is native to Peru, Colombia, Brazil and French Guiana and occurs in the Amazon river basin, along the Amazonas, Içá, Negro, Solimões and Ucayali river systems, and also in the Approuague and Oyapock drainages. In its natural environment the species typically occurs in slow moving water habitats, and has been observed sheltering under submerged branches. Feral populations also occur in China, northern Australia, and now in Florida, USA as a by-product of the ornamental fish trade. The species is limited in its distribution by its intolerance of cooler water temperatures, the lower lethal limit for the species is 12.9 °C (55.2 °F).

Although the species is widely regarded as sexually monomorphic, it has also been suggested that males grow more quickly, and in some naturally occurring strains, males are noted to possess dark blotches on the base of the dorsal fin.The species reaches sexual maturity at approximately 1 year of age and continues to reproduce for 9-10 years. Frequency and timing of spawning may be related to the occurrence of rain. A. ocellatus are biparental substrate spawners though detailed information regarding their reproduction in the wild are scarce. It has been observed that the closely related Astronotus crassipinnis may, in times of danger, protect its fry in its mouth in a manner reminiscent of mouthbrooding geophagine cichlids. This behavior, however, has not yet been observed in A. ocellatus. In captivity pairs are known to select and clean generally flattened horizontal or vertical surfaces on which to lay their 1000 to 3000 eggs. Like most cichlids, A. ocellatus practice brood care, although the duration of brood care in the wild remains unknown.

Examination of the stomach contents of A. ocellatus by Winemiller (1990) demonstrated that the natural diet of this fish consists primarily of aquatic and terrestrial insects (which comprise up to 60% of the diet), although small fish, and to a lesser extent crustaceans, are also consumed. Most fish eaten by A. ocellatus in the wild were relatively sedentary catfish, and included Bunocephalus, Rineloricaria and Ochmacanthus species. The species uses a suction mechanism, generated by jaw extension, to capture prey, and has been reported to exhibit “laying-on-side” death mimicry in a similar fashion to Parachromis friedrichsthalii and Nimbochromis livingstonii. The species also has an absolute requirement for vitamin C and develops health problems in its absence.

The century zoologist and founder of Harvard University’s Museum of Comparative Zoology, Jean Louis Rodolphe Agassiz. The genus Lobotes however, is entirely marine, and fishes of this genus, known as tripletails (Lobotidae) are of no meaningful relation to cichlids. It is surmised that Agassiz chose Lobotes in describing the oscar based on the fact that he believed his specimen or specimens to have been collected in the Atlantic Ocean. Considering the similarity in appearance of the oscar to the marine tripletails and the erroneous locality information, the original placement of the oscar in Lobotes is not surprising. Current taxonomic placement of the oscar is in the South American cichlid genus Astronotus. Astronotus is derived from the Greek words “astra” = ray and “noton” = back. Ocellatus is Latin for spotted, referring to the spotted pattern on the body of this fish. Synonyms include Acara compressus Cope 1872 and Hyposticta acara Cope 1878. Astronotus has long been considered a monotypic genus, but recent studies indicate that a number of other species of “oscar” abound in South America. Astronotus ocellatus as originally described appears to be restricted to Peru and Brazil.

A number of ornamental varieties of A. ocellatus have been developed for the aquarium industry. These include forms with greater intensity and quantities of red marbling across the body, albino, leucistic and xanthistic forms. A. ocellatus with marbled patches of red pigmentation are sold as red tiger oscars, while those strains with mainly red coloration of the flanks are frequently sold under the trade name of red Oscars. The patterning of red pigment differs between individuals, in the United Kingdom one A. ocellatus reportedly had markings that resembled the Arabic word for “Allah”. In recent years long-finned varieties have also been developed. The species is also occasionally artificially colored by a process known as painting.

A. ocellatus are popular as pets, and are regarded as intelligent by aquarists. This is in part as they learn to associate their owners with food and are purported to be able to distinguish their owner from strangers.

Despite their large size and predatory nature A. ocellatus are relatively placid aquarium residents best housed with other fishes too large to be considered food items. They also get along with aggressive fish such as a convict cichlid.

A. ocellatus are known to uproot plants, and move other objects in aquariums and are best maintained in volumes of 200-600 litre (75 or more gallons). A. Oscar is relatively tolerant of a range of typical aquarium water chemistries, though its large size and messy feeding habits necessitates that efficient filtration be installed on the aquarium. A. ocellatus is undemanding to feed in captivity and will accept a range of foods that include pieces of fish, prepared cichlid foods, and even small household lizards! Oscars may also tend to jump out of an aquarium if the lid isn’t supported sufficiently.

Although the type locality for Agassiz’ specimen was published as “Atlantic Ocean” the Oscar is a strictly freshwater species restricted to the Rio Ucayali drainage and upper Amazon river of Peru and Brazil. The error committed by Agassiz is easily attributable to the fact that many early species descriptions were based on specimens shipped to zoologists from far-flung locales and often these specimens were accompanied by little in the way of specific locality data. Indeed, there are many instances of early species descriptions with locality errors similar to the case of the Oscar. A non-native population of Oscars is well established in South Florida, USA.