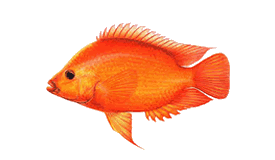 The Midas Cichlid (Amphilophus citrinellus) is a fish endemic to the San Juan River and the adjacent watersheds of Nicaragua and Costa Rica, including Lake Apoyo, Masaya, and Manaua. The native range consists of Tropical America, the Atlantic slope drainages in Central America from the Great Lakes and lakes of Nicaragua to Rio Coto in Costa Rica. Today they are abundant in the state of Florida, primarily southern Florida.

Midas cichlid found their way into Florida waters through aquarium release or aquaculture escape. They were discovered in Florida in 1980 and are currently prevalent in Miami-Dade County canal systems. Aquarists originally sold the A. Citrinellus fish under its aquarium trade name Midas Cichlid.

Their scientific name is Amphilophus citrinellus; the family Cichlidae is closely related but not the same as the red devil cichlid ( A labiatus). The Midas Cichlid fish is a member of the tilapia and cichlid family.

Generally, this fish species prefer a lake or canal habitat with clear water abundant with shoreline crevices to hide from predators. The Midas Cichlid primarily lives in calm and slow waters at depths of 3-114 feet (1-35m). They typically inhabit areas around tree roots and outcroppings that are quite rocky. They feed on snails, insect larvae, plant material, mollusks, and smaller fish.

The Midas cichlid species is heavily built and capable of standing up to any other large-sized fish fighting over territory. They have sharp teeth, powerful jaws, and an extensive physical size compared to other aquarium species.

The Florida Midas Cichlid (amphilophus citrinellus) is very colorful, with multiple color phases ranging from black and dull grey to orange, white, and red. All their young start off as grey, looking similar to small bluegill, but when they grow to become three inches long, they begin to change and have bright colors. Usually, a mottled coloration depicts a fish in the transition to show they are beginning to grow and transform.

The large Midas cichlid in Florida gradually starts to become reddish-orange with numerous gray-black scales and large black blotches on its side or back. The upper portion of the head is concave, and they have a rounded caudal fin. Similar to many other cichlids, the Midas cichlid has broken lateral lines.

Over 95% of Florida Midas Cichlids over 10 inches are bright in color, but this is almost reversed in their native range. There, males and females are equally likely to be colored brightly with a nuchal hump pronounced forehead.

Florida Midas Cichlids are omnivores with large appetites. They primarily feed on snails and other benthic material, including aquatic insects, small fishes, and some plant and animal matter attached to or associated with submerged logs, leaves, and rocks.

Typically, Midas Cichlids grow fast until they hit half their adult size. Afterward, they slow down and continue to grow slowly for a couple of years.

They can reach just over a foot in length and can also weigh over 2.5 pounds. Males tend to be larger than females. Colorado and Parismina river areas of Costa Rica and Lake Nicaragua have the largest Midas Cichlids.

Like other spawning cichlids that provide biparental care, the adult Midas cichlids produce a mucous body covering the young feed on. The females mature by 7 inches and the males by 8 inches. March through May is typically the peak spawning season in Florida. They are extremely aggressive and territorial fish when breeding.

They are generally a reasonably peaceable cichlid compared to other large Central American cichlids. Though naturally, Midas Cichlids are monogamous and parental. As a result of the competition for intense predation of their young and limited spawning sites, their territory’s vigorous defense becomes quite essential. Even though both males and females engage in defense, they differ in aggressiveness. Usually, both sexes’ aggressive responses are measured by counting the number of bumps and biting each fish directed towards its mirror image.

In direct comparison with females, males had higher mirror scores with even more significant variance. Besides, the scores of individual males were somewhat consistent over time compared to females. Females close to spawning had the highest mirror scores while males highest at the beginning of the reproductive cycle. The selection has favored aggressiveness in both sexes. Thus, we can argue that the differences in aggression are due to selection acting dissimilarity on both sexes.

These fish like to hide in submerged logs and vegetation. Catching them can be quite tricky. When trying to catch the Midas Cichlid, always use small hooks as even the larger cichlids have little mouths. Florida anglers often use a Daiwa Certate spinning reel in the 1500 size and alongside an ultra-light spinning rod. Live bait is often most effective for catching Midas Cichlids, but they will also take lures occasionally. The key is to have clear water because when the water gets cloudy, it is pretty tough to get them to bite. Due to how curious they are, they will most likely put things in their mouth to check them out.

Crankbaits like a floating Rapala are often effective lures. Cast it out next to some good cover and let it sit for a while. Afterward, twitch it a little to dive down a few inches deep and float up again. They will hit the small crankbaits. Also, you can try small rubber jigs. A practical method is to suspend them in front of the Mayan cichlid and twitch them to allow them to sink. They would most likely get a curiosity bite.

Not much is known about Midas Cichlid’s nutrition, but some people eat them and say it’s a tasty and nutritious fish that can be either grilled or pan-fried with various dishes.