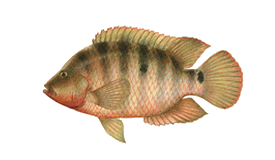 The Mayan Cichlid is a freshwater fish that inhabits hypoxic, brackish, or warm waters. It is an oval-shaped fish with broad vertical stripes, spiny fins, and a turquoise ring on its tail used to confuse and keep predators at bay.

Typically, it has an olive-brown to beige color with dark green stripes. When it is in its breeding period, it tends to show more striking color variations. The Mayan Cichlid is native to Central and South America, but it has established a strong foothold in South Florida. These fish species are also known as orange tiger, Mexican mojarra in English, and castarrica in Spanish.

Due to its delicious flesh and size, this beautifully colored fish is the sole focus of various aquaculture facilities in multiple rivers, lakes, and ponds in its native range. Also, it is a sought-after target among anglers from around the world.

This fish species has small caniform teeth that it uses to grasp its prey. Still, primarily, they rely on their sizeable pharyngeal tooth pads for crushing and chewing their prey, especially invertebrates that are hard-shelled.

The Mayan Cichlid is distinctive for its attractive body color. The adults during breeding look incredibly vibrant. This fish’s background color is dorsally olive-brown, and then, towards its abdomen, you find beige or light brown grading.

There is pink in the throat region, sometimes reaching a bright red in breeding males. The first of seven wide green-black bars are located just behind its head, with the last in its caudal peduncle. Half of its caudal peduncle has a broken lateral line and a turquoise ring with a black center. This part is known as the eye spot, used to confuse predators.

The Mayan Cichlid fish is native to southeastern Mexico’s Atlantic slope waters in Central America, Honduras, Belize, Nicaragua, and Guatemala. The first reported Non-indigenous population case of the Mayan Cichlid was in 1983. However, they now thrive in the Everglades and Florida Bay in South Florida and are found as far north in Florida as Lake Okeechobee and the St Lucie Canal.

Like many other fish members of the family Cichlidae, the Mayan Cichlid thrives comfortably under various environmental conditions. When they are within their native range, they are found in different lowland coastal habitats, exhibiting tolerance for brackish to marine conditions. These species are adaptable and can live well in lakes, rivers, marshes, and lakes.

They also tolerate a wide range of salinities and low-oxygen environments. Usually, spawning commences in April and continues through June. During this period, males and females guard their brood and nest for six weeks.

The Mayan Cichlid feeds on aquatic invertebrates and small fishes. Although they also swallow detritus and plant matter when consuming their prey.

However, for the study conducted in Florida at the National Park, the fish and wildlife biologists found that rather than two years, the southeastern Mayan Cichlids reached a maximum of 7 years with a size range of up to 44-130mm for two-year-olds and 33-66mm one-year-olds. Males reach a larger size than females at a slower growth rate.

Mayan Cichlids live in captivity for up to 11 years and obtained a maximum size of 1,130g of weight, 394mm in length. Although, this is not common. The average maximum size of this fish is around 250-275mm for total length. The world record was 2.5 pounds and 15 inches.

The Mayan Cichlid fish spawn usually in the early summer and during spring. The peak spawn happens in May and June. They construct their nests and guard their young for about six weeks.

Mayan Cichlids serve as prey for various terrestrial and even aquatic organisms, including other fishes and wading birds. Birds like the snowy egrets feed on Mayan Cichlid.

This exotic fish made its appearance in Florida Bay in 1983 and has since been a thriving gamefish for Florida anglers and visitors. They have spread into most freshwater lakes and canals from Miami to the Kissimmee Chain of Lakes. Light tackle with natural baits is the most preferred method of fishing for this non -native fish.