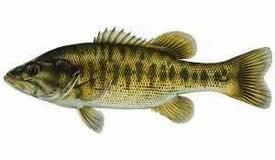 The Guadalupe bass Micropterus treculii is native to the Edwards Plateau of Texas and from the same family as the smallmouth bass. Smallmouths are the species that pose the greatest threat to the Guadalupe bass because of the high rate of hybridization.

Other names for this fish include Guadalupe Spotted bass, black bass, and unofficially are called guads. These fish are generally a green color and distinguished from the other Texas bass species in that they don’t have vertical bars like smallmouths, it doesn’t have a protruding jaw like largemouth bass, and its coloration extends lower on the body than a spotted bass.

Like the other black bass, which includes smallmouth, spotted, and largemouth bass, the Guadalupe is a member of the sunfish family Centrarchidae even though it is not a true bass.

The Guadalupe bass is a prized game fish for its tough, long fights in which it maneuvers the current and its unusually strong muscles.

The Guadalupe fish is small in size but rather powerful, with physical traits that resemble the spotted bass. A typical adult weighs about one pound and reaches 12 inches in length.

Their backs have many smaller diamond marks scattered and 12 dorsal-fin rays. They possess a lateral line covered in separately circular spots or diamond shapes. This particular species has a lighter shade, but just like most other black basses, the Guadalupe bass is lime to olive green in color. When they age, the color fades from black to olive, and they end up in brighter and more natural colors than the smallmouth bass. Their tongues also contain a rectangular tooth patch.

Up until recently, Guadalupe has been considered a rare bass species and facing extinction.

They are continuously decreasing in numbers due to some factors such as hybridization with smallmouths, habitat degradation, and reduced streamflow.

Texas is currently running a Restoration program for the Guadalupe Bass that targets the Llano River to encourage conservation in their home range. The restoration initiative is working with landowners to reduce activities near riparian land, which may cause a reduction in water quantity and quality.

A recent statement by The Texas Parks and Wildlife Department confirmed that they would most likely stock many basses in the coming future to beat out the hybrid population as one of the measures to protect their population.

How to Fish Sunshine Bass: Essential Take-Aways for an Angler

Where Can I Find Them?

Sunshine bass are found throughout Florida, where they were produced and stocked. The sunshine bass fish are most active during the winter months. They prefer cold water conditions, often seeking deep lakes or feeder streams. Look for baitfish schools out in the open water of large lakes or cast in river drop-offs and other flowing water.

Some places attract more sunshine bass than others, but you’ll find them stacked up in the deep holes near river sandbars. They assemble early in the morning and late evening; pickings may be slower during the day.

How to Fish Sunshine Bass: Essential Take-Aways for an Angler

Florida sunshine bass are voracious feeders that will strike fast and hold tight. Sunshines will fight hard, coming up, running back and forth, or shaking their heads. With their many directional changes and powerful turns, sunshines put up a fight that has been compared to redfish.

The easy to land catches can often be located in a lake and river where there are signs of nervous baitfish.

Sunshine bass will swim deep, attempting to head for open water when hooked. Don’t be in a hurry, especially if you are fishing with shiners, be gentle with the hook, and manage the bait gingerly. This is because sunshine bass has smaller mouths than native largemouth bass.

These Florida fish prefer shad as their favorite food, but they are by no means picky. Sunshines often go after live threadfin and shrimp baits too. The young fish feed more on insects and crustaceans.

Fish for sunshine bass easily with an artificial crank or spinnerbaits. They will readily bite anything that resembles small fish.

Use topwater lures, which are effective when they school near the surface; when it’s slow on the surface, troll for sunshine with artificial lures. Any artificial pattern that resembles shad is excellent for deep river holes, lakes, or spillways.

Stay prepared at all times because sunshine bass put up a spirited fight.

Spawning for this state bass usually begins in March and continues as late as June. A secondary spawn can occur in late summer or early fall as well.

Similar to the other black bass, the male Guadalupe constructs gravel nests in shallow waters to spawn. After the female bass lays her eggs, the male chases her away and remains there throughout the incubation period to guard the nest.

The Guadalupe bass feeds at night, and you’ll find them moving freely around their habitat, making it a prime time to make a catch. The Guadalupe fish prefers feeding on water-bound insects, golden shiners, fatheads, gizzard shad, and crayfish. Their primary food preference appears to be aquatic insects. The most preferred insect for juvenile Guadalupe is the mayflies.

But you can occasionally find them feeding on hymenopterans that include wasps and bees.

The quantity of food they take and their food preferences change with the season. For instance, in summer, they tend to consume more food than what they take during winter, which is when they get dormant with the decrease in water temperatures.

Anglers usually target bass for its sport fishing quality rather than for food. However, Guadalupe bass offers white meat that is high in proteins and low in fats. Many who have tried it say the guad is delicious, but the taste will depend on where you made your catch.

Allen Christenson held the Texas record since 1983 for the biggest Guadalupe bass ever caught at 3.69 pounds.

In January 2014, an angler in the Colorado River hooked onto a larger Guadalupe bass with a fly rod using a crayfish fly. This fish holds the state freshwater records at a length of 17.25 inches and a weight of 3.71 pounds.

Fishing for the Guadalupe river bass is a lot like chasing smallmouth bass. However,  be on the lookout as they are adept at using the currents to their advantage. For a successful Guadalupe bass fishing expedition, consider moving away from population centers and lakes to the most beautiful waters of the hill country, where you may be able to make a good catch of this stream-born bass.

The Guadalupe bass population is restricted to rivers and creeks and listed as near threatened. Because of this status, most anglers practice catch and release techniques to improve the state fish population.

Where to Catch the state fish of Texas

Their primary habitat is Llano River Watershed Alliance, The Guadalupe River, Brazos River, the San Antonio River, Colorado and San Marcos. Anglers can also catch them at Onion Creek, San Gabriel River, comal river, and run-off creeks such as Barton Creek. In the Llano River, this species is farm-raised and stocked.

When summer comes, many parts of the rivers: Guadalupe, San Antonio, upper Nueces river drainages in southern Texas, and Edwards Plateau, get heated, and temperatures can reach up to 95 degrees, making Guadalupe bass look for deep waters.

They move downstream into lakes or reservoirs. If you are near the Stillhouse Hollow Reservoir, you can try and make a catch there as the Lampasas River flows into it.

The best method of choice to catch Guadalupe bass is Topwater fishing. Deer-hair bugs, sliders, and poppers baits, as well as crayfish patterns and small crankbaits, have all proved to be effective while fishing the streams.

Guadalupe bass, like all other types of bass fish, becomes very aggressive during the spawning period. The Buzz bug, spinnerbaits, and Jim Stewart’s Spin-N-Jim are highly effective at provoking the bass, causing it to attack in an attempt to protect its territory.

Tell me more about the Guadalupe bass