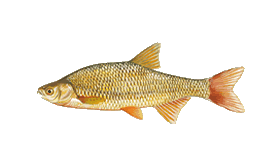 Golden shiners are cyprinid fish native to eastern North America and one of the largest of the minnow species. The golden shiner Notemigonus crysoleucas is the sole member of its genus. They are likely the most widely pond-cultured fish in the United States and are primarily used as baitfish.

Golden shiner fishing for trophy bass is one of the sport’s most exciting and effective techniques. According to top Florida guides, at least 90 percent of the state’s 10-pounders are taken on these frisky live baits.

Golden shiners are a valuable source of food for many animals, including fish and birds. For example, the golden shiner is the primary forage of largemouth bass in Florida and in many parts of the continent. Anglers fishing with golden shiners often have the most luck with landing a trophy bass of a lifetime. In addition, they are often used to feed other popular game fish such as trout.

Golden shiners are a slab-shaped minnow with golden scales and a lateral line that curves down into the lower third of its body with its lowest point just above its pelvic fins. Young Golden shiners have a small mouth and a dark lateral band, making them easily confused with other species of minnows when observed in the water. Golden shiners are often olive or dark green on top with a silvery-white belly. Their sides can be silver in smaller fish and golden in larger ones. They have a forked tail, an anal fin with 8-19 rays, and a dorsal fin with almost always eight rays. The pelvic fins are typically reddish or orange in adults.

These baitfish inhabit a vast range from central Manitoba, throughout the East Coast and west to Texas. They’ve also been introduced as far west as California. Their native range also includes the Mississippi River and the Great Lakes.

Wherever they’re found in good numbers, big bass will target golden shiners, selecting them over crayfish, shad, bluegills, or other common prey.

Widespread introductions of the golden shiner could have reduced the diversity of minnow species in some pond and lake habitats throughout the northeast.

Golden shiners are usually found in lakes with a lot of aquatic vegetation, ponds, or the slowest, quietest parts of streams and rivers.

These prominent members of the minnow family commonly reach 10 inches and occasionally approach 12 inches and a pound in weight. Now that’s a meal for monster bass.

Golden shiners lay adhesive eggs during spawning time that stick to aquatic plants. A female golden shiner can lay up to 200,000 eggs multiple times during a season. The prolific nature of golden shiners makes them a valuable prey source to many popular game fish in freshwater areas.

Golden shiners are capable of both catching small invertebrates or fish and filter-feeding. Plant material usually makes up a large part of their diet.

Catching bait can also be a blast. Guides often chuckle when they have to urge their clients to quit fishing for bait and start rigging for the big bass they’ve traveled to Florida to catch. Catching bait is fun, whether you’re after golden shiners in Massachusetts or Florida or goldeyes in Minnesota. Catching your own saves big bucks, as wild shiners typically cost around $14-20 a dozen. And you can expect to go through six-dozen in a day if the bite is on.

Golden shiners are often referred to as pond shiners or Arkansas shiners and shouldn’t be confused with the European species, the rudd.

Golden shiners have a tiny mouth despite having a relatively large body, so appropriate hooks are in the #10 to #14 range. Treble hooks hold bait on the hook well, and their small barbs don’t injure valuable baits. Golden shiners have an opportunistic diet, taking zooplankton, larval insects, fragments of plants, and filamentous algae that often grows on plants or rocks. Occasionally, they eat small minnows.

Chumming with oatmeal, casting the flakes over shallow, weedy flats will bring schools of golden shiners into the area and get them feeding. Then, impaling several oatmeal flakes on a tiny hook or balling bread around the tines of the treble hook is the basis of golden shiner fishing. One or two little split shots complete the rig. Small pieces of earthworm work, too. Golden shiners can also be caught on tiny marabou crappie jigs in the 1/32-ounce range.

A long fiberglass or cane pole is the most effective setup when a good school is assembled and rolling the surface as they feed. First, lower your bait, holding it near the surface until a golden shiner bite, then unceremoniously hoist it in. Next, carefully unhook your shiner, holding it firmly but without squeezing, then place it in your aerated or oxygenated tank for bait fishes.

Rigging is Key to success

For maximum fun, try true ultralight tackle for golden shiner fishing (or should we say catching). A 4-1/2- to a 5-1/2-foot limber rod and micro reel spooled with a 2-pound test means a battle from bigger golden shiners. At times, the web-like line will get more bites than the 10-pound mono used on poles.

If you’re eager to hook a big bass, catching golden shiners with a cast net is easier and more efficient (if you know how to throw a net).