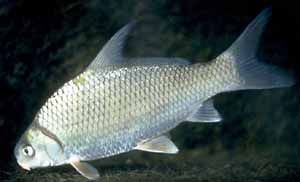 DISTRIBUTION: The highfin carpsucker is a rare catch in Florida, where their range on the Gulf Coast is from Louisiana eastward to the Choctawhatchee River of Florida. This schooling fish found in moderately flowing clean waters can reach 20 inches and weigh three pounds. This schooling species occurs primarily in rivers and reservoirs and occasionally in moderate or large streams. Highfins are widespread and often abundant in the Mobile basin, particularly below the Fall Line and in the tailwaters of most locks and dams. Royal D. Suttkus (1995, personal communication) believes that a new species may be represented by populations found in the cut and Choctawhatchee river drainage in southeastern Alabama and northwestern Florida.

HABITAT AND BIOLOGY: This schooling species occurs primarily in rivers and reservoirs and occasionally in moderate or large streams similar to its counterpart, the Grass Carp fish. Pflieger (1975) reports July spawnings in Missouri. We have encountered tuberculate adults running eggs and milt from April through June, indicating a protracted spawning season in Alabama. We have collected small, 1- to 3- inch highfins along sand and gravel bars in June and July, as well as spent but still slightly tuberculate adults as late as August.

To find out more about the fish in the state of Florida, visit MyFWC.com