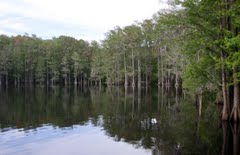 Lake Munson is a shallow reservoir on the southeast side of Tallahassee in Leon County, Florida. Historically known as Munson’s Mill Pond as early as the 1840s, in 1950 a permanent dam was constructed.

Lake Munson can be found on the Lake Munson USGS quad topo map. Lake Munson is one of the better bass fishing lakes in Leon County. The latitude and longitude coordinates for this lake are 30.3694, -84.3082 and the altitude is 23 feet.

Anyone interested in fishing Lake Munson should consult with local guides and resources before heading out to fish. Anglers who have fished Lake Munson are invited to submit reviews of the lake on our fishing forum. Tell us when you went, what you caught, how the fishing experience was overall. Thanks in advance for your reviews, they help to make fishing better for all anglers.

We truly hope your fishing adventures are enhanced by our Florida fishing website. The fishing site also provides users the ability to easily track fishing catches and experiences on Lake Munson with exact GPS location on the body of water. Good Fishing!