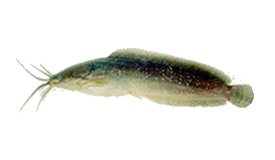 Elongated, gray, and scaleless catfish-type body with a large mouth, sharp pectoral spines, and four pairs of barbels; light to dark gray in color, but albinos occur; noted for the ability to breathe air and make short overland movements by pulling themselves along with their pectoral fins much like an infantry-man scooting under the barbed wire; early accounts that this fish would eliminate native fishes were erroneous, and it has not had major detrimental effects; species occasionally abundant and still considered undesirable.

Most commonly encountered in Everglades and associated canals, but also occurs throughout central and south Florida; first reported in 1967 in Broward County and later in Hillsborough County, now these two populations have joined; abundance has decreased since 1970. Native range southeast Asia.

Prefers shallow and highly vegetated water bodies; sometimes abundant in small deeper ponds without the normal complement of native fishes. They sometimes dominate small Everglades pools during the dry season, but not necessarily to the exclusion of native fishes. They are much less abundant in large lakes and canals, and then usually only found in shallow vegetated areas; can live and even thrive in water with little to no oxygen since can breathe air; well-adapted to transient water bodies with muddy bottoms that partially dry up seasonally; occasionally found in road storm drainage systems from which they emerge during flooding events; habitat preferences tend to segregate this fish thereby reducing its overall effect on native species.

Fairly rapid with sizes up to about 12 inches; maximum size about 20 inches and three pounds.

Not commonly eaten in western societies, but prized in native range (possibly in part because they can be kept live in moist bags for transport); no bag or size limits.

Special Note: Possession and transportation of live walking catfish is illegal without special state and federal permits; can only be possessed dead, so anglers who want to try eating them should immediately put them on ice.

Within Asia, this species has been introduced widely. In the United States, it is established in Florida and reported in California, Connecticut, Georgia, Massachusetts, and Nevada and regarded as an invasive species.

The walking catfish was imported to Florida, reportedly from Thailand, in the early 1960s for the aquarium trade. The first introductions apparently occurred in the mid-1960s when adult fish imported as brood stock escaped, either from a fish farm in northeastern Broward County or from a truck transporting brood fish between Dade and Broward Counties. Additional introductions in Florida, supposedly purposeful releases, were made by fish farmers in the Tampa Bay area, Hillsborough County in late 1967 or early 1968, after the state banned the importation and possession of walking catfish. Aquarium releases likely are responsible for introductions in other states. Dill and Cordone (1997) reported this species has been sold by tropical fish dealers in California for some time. They have also been spotted occasionally in the Midwest.

In Florida, walking catfish are known to have invaded aquaculture farms, entering ponds where these predators prey on fish stocks. In response, fish farmers have had to erect fences to protect ponds. Authorities have also created laws that ban possession of walking catfish.