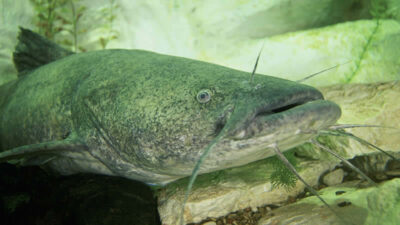 Milton resident Eric Auston Jr. now holds the distinction of having landed the largest flathead catfish ever caught with a rod and reel in Florida waters.
Auston, 33, was fishing Oct. 9 in the Yellow River with his good friend, Brandy Wallace, when he caught a record flathead catfish weighing slightly more than 55 pounds. He used a rod and reel with a 25-pound-test line and small bluegill as bait, according to a news release from the Florida Fish and Wildlife Conservation Commission.

His fish was substantially larger than the existing Florida record flathead catfish, a fish that weighed 49.39 pounds, caught in the Apalachicola River in 2004. Auston said he fishes for flatheads only a few times each year. Brandy’s biggest flathead prior to last weekend weighed 42 pounds, but that fish was caught on a bush hook.

The Florida Fish and Wildlife Conservation Commission maintains records for most species of freshwater fish. The FWC will present Auston with a certificate of his record catch for display.

State record fish must be legally caught in Florida, identified to species by a fishery biologist, and weighed on a certified scale. Auston said he was especially grateful to the FWC for its efforts to get the fish certified.

Anglers can also participate in the Big Catch angler recognition program. Anyone who catches a fish above the minimum qualifying weight for that species can submit a Big Catch application. Information about the State Record and Big Catch programs is available at MyFWC.com/Fishing.

Flathead catfish are not native to the eastern United States. In the 1970s, they made their way to one southeastern state after another. First identified in the Apalachicola River in 1982, they are now found in every Panhandle river from the Ochlockonee River west to the Florida-Alabama line. They are significant predators and should be harvested when caught. There are no bag or size limits on flatheads in Florida, and they are good for eating.

In Midwestern waters, flatheads are native. The world record is a 123-pound monster caught in Kansas in 1998, according to the International Game Fish Association. Fisheries biologists expect flatheads may eventually grow close to that size in Florida waters.