Snakehead Fishing with Bill Dance Outdoors is one of the oldest continuously running television shows. It has aired since 1968 with a primary focus on sport fishing. Hosted by America’s best-known fisherman, Bill Dance, audiences are treated to an educational, humorous, and sometimes offbeat way of having fun with the fishing sport and learning about outdoor products.

To watch the complete show in the video, please click here! 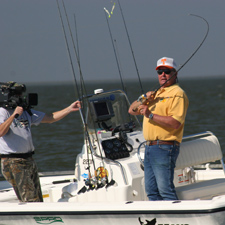 Bill Dance, one of the world’s most famous fishermen, was contemplating becoming a doctor like his father, grandfather, and three other generations of Dances.

Then, driving home one night while enrolled in medical school in Memphis, Tenn., in the early 1960s, he came upon a horrific motorcycle crash. The grisly encounter changed his life.

“I was the first person on the scene,” Dance recalls. “It was very traumatic, and it affected me deeply. At that moment, I knew I didn’t want to be a doctor anymore.”

What did he want to be?

And fish, he did. He began competing—and winning—in bass tournaments and landed a lure manufacturer for a sponsor. The sponsor encouraged Dance to start a TV show to help promote the product. Bill Dance Outdoors premiered on a Memphis ABC affiliate in 1968 and has been growing in popularity. Today the show is televised nationwide, and its host has achieved celebrity status among the nation’s 45 million anglers.

From his home and production studio in Collierville, Tenn. (pop. 31,872), near Memphis, Dance oversees a fishing empire that includes his TV show, tackle endorsements, how-to seminars, his magazine, and a series of popular “blooper” videos, hilarious, self-deprecating outtakes from his shows.

“I’ve got to be careful not to let this job turn into work,” he jokes.

Dance, 67, and his three-man camera crew may spend as much as four days fishing and filming to get the 25 minutes of edited footage necessary for each of his 26 shows each year. The half-hour programs are broadcast on NBC Sports, and the original shows are rerun year-round. Each episode features Dance catching fish and chatting as he explains how he does it. He talks to the viewers, himself, and the fish. “C’mon in here, big boy. Easy, now. Man, what a belly on you! See you. . . ” All his catches are released.

“Bill has a special knack for connecting with his viewers,” says Tony Mack, Bill Dance Outdoors TV producer for 36 years. “It’s hard to explain, but whatever he does, it works. People love it.”

“He’s the greatest people person I’ve ever known,” adds Carlton Veirs, who handles Dance’s appearances and endorsements. “Bill’s never met a stranger, whether at some rural little boat dock or a big outdoor show in Las Vegas. And it’s genuine; he likes people and people like him. That’s the key to his success.”

No trophies for “top fishing show” or “America’s most-watched Bill Dance outdoors program” adorn his office—mainly because no one in Dance’s organization has ever pursued such designations. “The only ‘award’ we care about,” says producer Mack, “is seeing the show grow from one small local station to being carried in every state with 18 million viewers.”

“I’m truly amazed by it all,” Dance says. “I’ve been fortunate and blessed to make a living fishing for largemouth bass, peacock bass, Asian Snakehead, and many other species while doing something I love.”