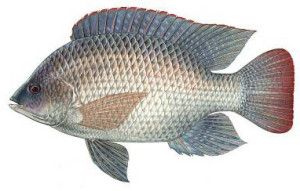 Young nondescript gray with a black spot at rear of dorsal fin; adults generally blue-gray shading to white on the belly; borders of dorsal and caudal fins with red to pink borders; broken lateral line and the spiny dorsal fin is joined to the soft dorsal fin. In central Florida, anglers can assume every tilapia they observe in fresh water is a blue, and any tilapia over 3 pounds is also likely a blue tilapia.

Widespread and abundant in Florida; found in fertile lakes, ponds, rivers, streams, and canals. It is tolerant of saltwater and found in some near shore marine habitats, such as Tampa Bay.

Native to north Africa and the Middle East.

Spawning Habits: Spawning occurs when the water temperature exceeds 68oF. Males dig large circular nests with their mouths in shallow water over a sandy bottom. The male swims out to a passing female and leads her to the nest where courtship occurs; female lays eggs and immediately takes into mouth after male fertilizes, after which she swims off, possibly to mate with another male. The males continue to guard nests and may spawn again with another female. Eggs hatch in female’s mouth, and fry occasionally released to feed, but whenever threatened they return to the female’s mouth until they are about three weeks old. This type of parental care is called mouth-brooding.

Feeding Habits: Feed primarily on plankton and small organisms living in or on bottom detritus; three most common foods consumed in Lake Alice and Lake George were diatoms, green algae, and detritus; dominant food items in stomachs of fish from Six-Mile Creek near Tampa were detritus, algae, diatoms, and plant material.

Grow rapidly for first few months, then slow somewhat but ultimately reach 5-6 pounds by age 3-5 yrs; fish weighing 2-4 pounds common; largest caught in Florida weighed 10 pounds and measured over 21 inches in length; Lake Lena fish yielded a maximum age of 6 years, and indicated that males were larger at each age than females.

Not normally known for their angling quality. The exception being some urban anglers catch these in ponds using small pieces of hot dogs, bread balls, dog food, or live worms; no bag or size limits. They are rarely caught on artificial lures. There is also a group of avid bow anglers that target this species.