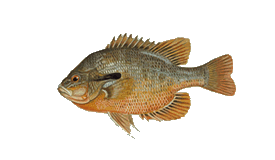 The redbreast sunfish is among the most colorful sunfish you can find. It is a panfish native to the eastern United States and eastern Canada river systems, from New Brunswick to Central Florida.

Redbreast Sunfish are common in springs and rivers of central to north Florida but absent from south Florida.

Redbreasts rarely live in ponds or large lakes since they prefer areas that have moving water. The best place to look for redbreast sunfish is in streams, swamps, and rivers with currents. The red breast may resemble other sunfish, like the bluegills, in bodily shape. However, they are longer than most and distinguished from other breams by their long opercular ear flap.

They have no recognized subspecies but can provide hybrid species with the sunfish family members.

The redbreast fish is the brightest of all sunfish species. Even though the females are less colorful than the males, they still have pale red or yellowish breasts and a dark lateral line that breaks into blotches. The males have many colors; orange, yellow, or red. It is an olive color that blends into a blue tinge bronze with a yellow belly and blue streaks on the cheek on the back and upper side. These fish are relatively small; most measure slightly less or sometimes more than ten inches and weigh just over a pound. Compared to most sunfish species, redbreasts take longer to grow and reach six inches after three years.

The name “longear” describes their long dark opercular ear flap. This ear flap is the most reliable feature to distinguish them from other sunfish. The “redbreast” name merely describes the male, whereas both sexes have elongated, dark, and narrow gill cover extensions.

Redbreasts are fond of sand-bottom areas and will inhabit the rocky areas of coastal-plain lakes, rivers, and streams. They frequent sites with limestone, logs, aquatic vegetation, outcroppings, and undercut tree roots. Their ideal habitat also consists of holes and shadows around submerged rocks. They are the most dominant sunfish species in the waters of northeastern Florida.

The redbreast sunfish diet is more varied than all other sunfishes. Like its Bullhead Catfish counterpart, it prefers bottom-dwelling food organisms like snails, insect larvae, clams, small fish, and crayfish. Sometimes it eats small minnows, crawdads, and mollusks when available.

The redbreast sunfish reproduce by constructing circular beds like other sunfish. Their beds are generally more spaced than the clustered beds of bluegills. They prefer to spawn in waters three feet deep and adjacent to objects like snags and stamps.

Sometimes they can occupy spawning beds that other sunfishes have abandoned.

The spawning period starts from May to August, preferably when the water temperatures range between 68-82 degrees.

After hatching, the redbreast males build the nests and guard the eggs and larvae. The females can lay between 1000 to 10,000 eggs in a single season, depending on their age and size.

Redbreasts are the prized game fish you can catch using artificial lures and natural baits. They fight and bite on small spinners, flies, crickets, grasshoppers, and worms.

The river bream is the only sunfish that consistently bites after dark. Anglers can catch redbreasts from the shoreline in many locations. Often the same live bait used for bluegill will work on redbreasts.

The most popular methods are jigging, bait-casting, and still fishing. However, many prefer pole fishing, using a cricket or a worm, and floating it under a small boat.

A line less than four pounds is best; anything heavier than that is likely to spook the fish. Consider your summer fishing gear and make everything smaller. To trigger the most bites, try experimenting with different colors of the ice fly and wax worms.

Sunfish rarely bite a moving lure. When the sunfish become inactive, jig your lure, then slowly allow it to stay still so that you can trigger a bite. If you prefer bobbers, ensure that it is thin. Good choices include a sponge bobber, a spring bobber, or a slip bobber.

Live bait, such as worms and crickets are usually the most effective. However, you can try the smaller varieties like redworms and earthworms because redbreasts can be picky and sometimes ignore feeding on nightcrawlers.

Sometimes using a leech over worms is preferable because they stay hooked longer and discourage bites from the smaller redbreasts, enticing the larger fish. When using a leech as bait, ensure that it is small, preferably less than an inch.

However, earthworms are usually the preferred choice because they are easy to get. They are also inexpensive and better bait when the redbreast sunfish feel picky. Worms usually attract smaller fish in good numbers.

Although most people prefer to catch redbreasts using live bait, it is not the only effective way. The best redbreast sunfish lures are small spinners, jigs, or any lures that imitate invertebrates they enjoy feeding on. Such lures are best when fishing in areas between six inches and six feet deep, as you can vary your rod position.

The Florida state record is 2.08 lbs. The significant catch minimum in Florida is a minimum of nine inches or half a pound.