Dead Lakes are reported to have been formed when sand bars were created by the current of the Apalachicola River blocking the Chipola River. The ensuing high water killed thousands of trees in the floodplain, giving the 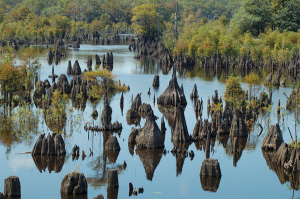 area its name….but who knows!

The dead lake’s history has several theories as to what happened; one theory was years ago, a temporary flood of saltwater killed the cypress trees; another is, as we meant earlier the Apalachicola river’s current made a sand bar where the Chipola empties and blocks the river and flooded the swamp. Who knows? We think what happened is that the dam that was built caused the death of these majestic cypress trees. Now, only the stumps are left to rot away. That is how the “Dead Lakes” got its name.

This Dead Lakes is an 83-acre area well-known as a fishing impoundment on the Chipola River. Freshwater species regularly caught include shell crackers, bluegill, and bass. Anglers find fishing in the spring season to be the most successful. Several small man-made ponds that are former fish hatcheries offer excellent fishing opportunities. Anglers may fish from shore or launch a motorboat, kayak, or paddleboat.

The Dead Lakes and surrounding areas are home to some of the finest and most unique fishing you will ever experience. The area is filled with wildlife and many sub-species of the largemouth bass family, big catfish, and hundreds of other types. Anglers should always exercise caution while boating due to the many snags, never-ending changes in water levels, and stumps in the lake.

Black crappie fishing is best throughout this quarter of the year. Try trolling for “specks” in the main channel of West Arm Creek using crappie minnows and jigs. FWC sampling in the fall indicated good numbers of bream (bluegill and redear sunfish) in the lake. These fish will be found by fishing near willow tree islands associated with stumps and cypress knees.

Shellcracker (redear) and bluegill anglers should fish an ultralight rod with a number 10 gold hook on the bottom with a wiggler. Stumpknockers (spotted sunfish) and redbreast sunfish can also be caught near stumps and snags with worms or beetle spins.

Largemouth bass fishing is a good year will slow down during the winter but should pick up in February. During winter, try fishing the old river channels and curves and cuts near snags and stumps in the lake. Work your artificial baits slowly, as the bass will be less active. The best baits for fishing artificial are spinnerbaits, 3/8oz jigs, 8″ rubber worms, chatter baits in the off-color water, and live shiners.

While dead lakes are considered a conservation area, it is not part of the state park system. There is very little information on the area, and you must go out of your way to explore it; within seconds of arriving, you will know the journey was worth the time and effort. What a wonderful place, the Dead lakes, surrounded by mighty rivers. You are in the area where the cell phone is worthless, and time doesn’t change. The stillness and power of the scene reminded you of the third scary movie. But unlike in the movies, there weren’t droves of wildlife; instead, only the occasional local fisherman disengaged from life.

Whether the Dead lakes were formed when sand bars created by water flowing from the Apalachicola were blocked up by the Chipola River, who knows, but what’s left is one of the most beautiful rivers of the Florida Panhandles, along with a thriving ecosystem for plants, trees, and wildlife.