2012 King of the Glades Schedule is out…

Full sponsor list and more info will be release soon……………

Canals along Alligator Alley among the hottest spots

June 21, 2010|By Steve Waters, Sun Sentinel
Despite the heat, bass continue to bite in the canals along Alligator Alley west of the Miami Canal.
Mike Lendl, the director of the King of the Glades Team Club Trail, said anglers in Sunday’s tournament out of the mile marker 41 boat ramp all caught good numbers of fish, but plastic frogs and big plastic worms were the keys to catching big fish.
Tony Masiello won the tournament with 20.37 pounds. According to Lendl, Masiello caught his fish on the new Sumkina Pro Toad lure and a swimbait.
Lendl and Brett Isackson were second at 20.23 using big plastic worms. Wayne Fellows and Mark Alexander also used big worms to finish third at 20.06 and Fellows had the big bass at 5.57.
J.P. McKay and Paul Wormser were fourth at 16.18 using big worms and Mike Harris and Mike Mahaffey were third at 11.68. Prospective members can call Lendl at 754-246-3198

King of the Glades Angler of the Year!

Dean Belits stormed threw the Holiday Park Opens winning 3 in a row. after winning his club tournament on the Alley he knew he could make some noise. When the Alley location was drawn for the King Series Classic Friday night; to Dean, it fell right in his game plan with the tournament being a east/west shootout on the Alley. Even with a big stringer weighed in by Jeff Justice and Danny Shelton the field thought Deans luck was out but then he proved them wrong weighing in a massive Everglades stringer to capture his 4th open win and the King of the Glades Series Crown. 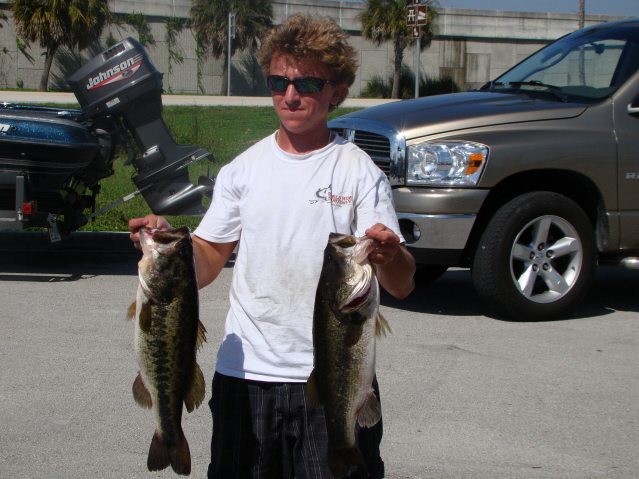 I would Like to thank all those who fished and sponsored the 2010 King Series ……….,

King of the Glades

2010 King of the Glades Schedule

Plans are underway for the 2010 Bottom Line Mike’s “King of the Glades” Open Team Tournament. With the help of our new sponsors, the event should prove even more exciting then ever before!

The tournament trail format will remain largely the same with four qualifying rounds at Holiday Park followed by “The Classic”, a “Winner-Take-All” event held at a secret location disclosed one week prior to the event.

Qualifier rounds are open to licensed anglers. Cash and prizes are awarded to the “Top Weigh-In Finishes” and the “Big Fish of the Day”. The number of places paid and amounts are based on the number of qualifier entries.

“The Classic” will consist of the top four finishes in each qualifying round.

Here are planned dates so you can mark your calendar.

For 2010 “King of the Glades” Tournament Trail:

Event dates and details are subject to change, so check back often to make sure you don’t miss out on your chance to be crowned “King of the Glades” in 2008.