Yellow River Canoe Trail Located in the western Panhandle near Crestview, this trail offers 56 miles of paddling. Good access to the Yellow River system is provided by two fish camps near the mouth of the river (Brown’s and Lindsey’s), south of Milton, and numerous landings along the river, including Holt (Guest Lake Landing), Milligan (below Highway 90), Crestview (highways 85 and 90), Blackman (Highway 2), and the Highway 87 crossing southeast of Milton.

The Yellow River has faster currents than other Florida rivers. The River is officially designated as part of Florida’s Statewide System of Greenways and Trails. The trail is bordered by hardwood forests, sandy banks with sandbars on some of the curves. The river widens downstream and becomes more placid through cypress-gum swamps. Long sections of the trail, that are undeveloped offering wonderful views of wildlife, particularly birds and turtles sunning on logs.

Yellow River fishing is fair for largemouth bass fishing is during the months of January through March. Overall, bass fishing should pick up dramatically toward the middle of March. Bream fishing may be a bit slow this time of the year, but should also pick up at the end of March. Fishing should be best in the lower, tidal reaches of the river where a falling tide will produce the best results. Effective baits to use for bass include plastic worms and any spinner-type lure. In addition to bass, the lower Yellow River harbors other sport fishes such as spotted sea trout and redfish. The winter season is usually a good time to fish for sea trout. Live mullet make good bait for sea trout.

Striped bass will also be available during the cooler days of winter and early spring. Dawn and dusk are the prime times for striper fishing. In the lower, tidal section of the river, you should fish around points of land extending into the river. Live mullet or menhaden make good baits. Live shrimp or twister-tail type jigs are also appropriate baits in this area. Striped bass is available in the Yellow River because of long-term stocking efforts by the Florida Fish and Wildlife Conservation Commission.

yellow river
Saturday, September 5, 2015
★★★★☆
“ Good information, would like more info on lower end of river. Have not fished this river before, so anyone's help would be appreciated. A good detailed map of this area would be great?”
- Harold Coverdale 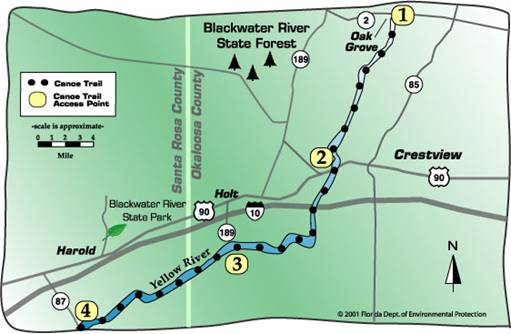