by Steve Kantner • December 5, 2013
Several years ago, I caught a mixed bag of four dozen bluegills and shellcrackers during a single, glorious afternoon. While that was practically all the law allowed, the real kicker is that these fish weighed close to a pound apiece. I was fishing a tournament on Lake Okeechobee, and on the afternoon in question, I fished out of Buckhead Ridge with a very good guide named Mike Backich. Don’t remember whether Mike remembers that trip, but for me, it remains a revelation. If I’m sure of anything, it’s that if I go out and land a blue marlin on a kite string, it could hardly surpass the sheer serendipity of tricking that many fat, sassy sunfish. I went from last place to second in a matter of hours, but then Mike knew where to look for truly big bream. I live in South Florida where a half-dozen native panfish species compete with a growing list of exotics, so confusion is inevitable. Although many claim the latter upset the ecological applecart (a supposition that’s rooted in fact), exotics are just as much fun to catch as natives. Whatever your preference, an education in the habits of panfish is always worth the cost of tuition. For starters, big panfish are elusive. Yet every species eventually comes within the reach of fly fishermen. Scientifically speaking, the several species we Floridians collectively refer to as bream (pronounced “brim”) are just plain, ordinary sunfish. Be aware that like other freshwater dwellers, they feed best, and spawn at particular times of year. For instance, if you go to Lake Okeechobee in November in hopes of catching a trophy bluegill, you’ll probably be disappointed. On the other hand, if you return in May you’ll be pleasantly surprised. Of all our local species, bluegills rank at the top of most fly fishermen’s lists because of their availability and affinity for hitting a floating bug. ‘Gills inhabit practically all freshwater bodies, although they seem to do better in lakes. While examples to the contrary exist, very few big ones ever show up in residential canals. This, in itself, is a point worth considering. Then again, some canals are known for trophy bluegill. Take, for example, the Lake Okeechobee Rim Canal with its famous chizziwink hatch. When these “blind mosquitoes” hatch, they can fill the air like snowflakes. This, in turn, brings up the bluegills, which respond with uncharacteristic abandon. Back when he lived in South Florida, fly fishing great Lefty Kreh used to snag the shoreline branches on that canal in order to shake off the chizziwinks. When the bugs hit the water, all hell broke loose. The Everglades canals are famous bluegill hotspots, too. Over the years, I’ve logged many, many hours bream bugging along Alligator Alley, where I learned to call big ‘gills “copperheads” in deference to the metallic-hued bar on their foreheads. Some anglers feel that big bluegill aren’t as plentiful now. When I quizzed long-time fly fishing guide Jack Allen on the subject, he was less than optimistic: “I remember we used to kill the big bluegills in L-67 canal in western Miami-Dade and Broward counties, but lately, I don’t see as many. I think it has something to do with Oscar.” Jack’s sentiments aren’t unique. However, the oscars and Mayan cichlids that anglers blame for the bluegill decline are confined to Miami-Dade, Broward and Collier county waters, where the occasional harsh winter keeps their numbers in check. Jon Fury, a biologist for the Florida Fish and Wildlife Conservation Commission who specializes in Everglades fisheries, sees the exotic panfish situation differently. “I looked up some old records. According to angler success statistics compiled since the mid 1980s, numbers of native panfish haven’t really changed that much. I agree that exotics take up space and change the energy flow. But despite the commonly held belief that they’re out-competing the natives, actual numbers don’t support this claim.” 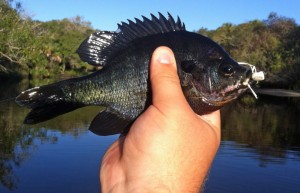 Aliens Abound Like it or not, exotics are here to stay. Traditionalists may wince at the thought, but pound-for-pound, exotics out-fight most native panfish. Of the several species fly fishermen are likely to encounter, oscars and Mayan cichlids are the most common. Still, there’s a short list of incidental panfish that includes several varieties of tilapia, the jaguar guapote and the colorful Midas cichlid. While the Midas has gained a modicum of regional popularity as a sportfish, a number of subsistence fishermen actually target oscars and Mayans. How prevalent are these two species? During a single 3-month period, creel census figures disclosed that nearly a hundred thousand were taken from Broward County’s Everglades Holiday Park alone. Local anglers recognize that oscars and Mayans become more active in hot weather, when they’ll strike surface lures with abandon. During winter, both species are partial to small nymph or streamer patterns worked around deep vegetation. Just for the record, the Mozambique, blue and spotted tilapia are vegetarians. Nevertheless, I once caught a spotted tilapia on a popper, which serves as a reminder that even vegetarians have attitudes. FS Originally Published Florida Sportsman May 2004 Read more: http://www.floridasportsman.com/2013/12/05/bluegill-fishing-fly/#ixzz2md14OKeG