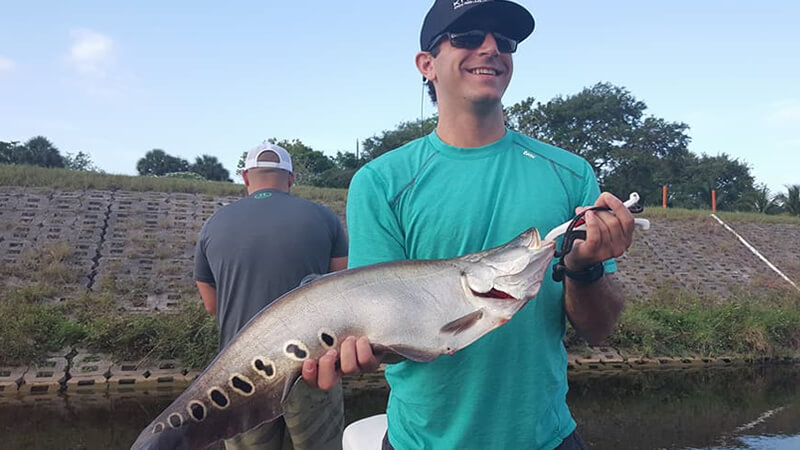 “Don’t release exotic pets!” That’s the message behind a colorful new poster available through a joint effort between the Florida Fish and Wildlife Conservation Commission (FWC) and the Florida Outdoor Writers Association (FOWA). The 20″ x 36″ poster, titled “Some of Florida’s Exotic Freshwater Fishes,” displays 17 species of nonnative fishes currently established in Florida. These exotic species were introduced by man from foreign countries, and with a couple of exceptions, are unwanted residents in the Sunshine State.

There are 34 reproducing exotic fishes established in Florida, according to the FWC‘s Division of Habitat and Species Conservation. The poster depicts the most widespread or commonly caught species. Wildlife artist Diane Rome Peebles produced 15 of the illustrations used in this poster. The other two illustrations were created by well-known wildlife artist Duane Raver. University and federal government researchers familiar with each species advised the artists to help create attractive, detailed and accurate depictions.

“The FWC actually initiated this project several years ago,” said FWC biologist Paul Shafland, who along with biologist John Cimbaro created the poster’s design. “Without FOWA’s generous funding, it would not have come to fruition at this time. We are very grateful for their contribution.”

FOWA provided $2,500 for printing of 9,300 posters, which are being made available to the public at no cost. The FWC hopes to convey a simple message.

“It is illegal to release any nonnative fish or any other nonnative organism in Florida,” said Scott Hardin, the FWC’s exotic species coordinator. “The only way to really stop exotics is to let people know they should never release them.”

Moreover, some people consider releasing exotic pets inhumane because most will die shortly after being released. However, those that survive could have detrimental environmental effects.

The FWC has a three-pronged approach to exotic fishes: prevention of illegal exotic fish releases through education, development of specific regulations, and law enforcement; assessment of those exotic fishes already present in Florida to understand what their effects really are; and management aimed at reducing the abundance of these unwanted residents. One management approach is to encourage people to fish for exotic fishes they can eat.

There are two exceptions: the butterfly peacock bass, which was purposefully released by the FWC to eat other exotic fishes, while increasing recreational angling opportunities in metropolitan Southeast Florida canals; and the triploid grass carp, which have been introduced to eat exotic vegetation.

The exotic fishes poster is online in a reduced, printable size at MyFWC.com/images/Conservation/FW_Exotics_Poster_Small.jpg or a full-size poster is available at any of the FWC’s regional offices. More information about exotic species in Florida is at MyFWC.com/Nonnatives. In the meantime, the FWC is reminding Floridians: “Help protect our natural resources – Don’t release exotic pets!”

WE ARE OPEN, FISH DON’T HAVE CORONAVIRUS. BUT WITH LIMITED CAPACITY!

Some areas are affected more than others, several urban boat ramps access are controlled by local, city, county or state agencies so we can not access.

Many other areas are not affected but maybe limited by captain capacity.

Know, we are ONLY doing private charters and have put advance cleaning practices implemented for the equipment, boats, and guides.

During these trouble times, if your stir-crazy and would like to get out please contact us. The online availability may not be completely accurate!